Good (insert time of day), shambling hordes! Today, I've got an uber awesome special treat for you. My friend Matt Blackstone is celebrating the upcoming release of his book, A SCARY SCENE IN A SCARY MOVIE, which comes out July 5th. The cover alone made me snarf milk out my nose. I'd gush about the innards too, but I'm still waiting for my copy to arrive so that I can gush properly. COME ON, UNIVERSE! GET WITH THE PROGRAM!

Anyway. Matt's a really good sport, because he didn't blink an eye when I told him I would love to see a guest post on how his OCD main character Rene would deal with the zombie apocalypse. And the result is...well, I'll let you see for yourself.

See, this what I’ve been talking about.

Kate should never have aced all those biology tests. Something bad was bound to happen. You’re not supposed to pass so many tests with flying colors. Flying colors are not your friend. Too many good things are not supposed to happen to one person and karma is a female dog. Plus, on more than one test, Kate got a 94%, which not only is another “A,” but it’s an unlucky and dangerous number because 9+4=13. Kate should never have accepted that grade. She should’ve added a mistake to her paper and settled for a 93. Or a 92. Or a 91. Or a 90. Or God-forbid, a B+.

Why? Why do I go to such lengths?

Because they prevent bad things from happening. Really bad things. Doomsday scenarios like sickness and death and lice in your hair and bombs and bad grades and bad friendships and family members and accidents—and now, thanks Kate, a zombie apocalypse.

Which is why I’m now wearing my Batman cape. It’s supposed to comfort me in situations such as this, but I’ve never been in a situation like this because I thought zombies were only in the movies and now they’re at my school which is scarier than a scary scene in a scary movie and they smell like barf and everyone knows that barfing is way scarier than a scary scene in a scary movie because your body has a mind of its own and can’t press pause. But even I'd prefer to be barfing than have someone barf on me. That is the opposite of b'noodles, which is a unique and cool word that means "unique" and "cool."

Stupid Aaron Kingsman. Stupid Kate Grable. What am I supposed to do now?

Just yesterday, some beefy football players whose breath smelled like beef tried to bite me. I thought it was Johnny Van Slyke because he’s always biting me in the shoulders especially when he “doesn’t have time to eat lunch” and because “fruit cakes are meant to be eaten.” But the doubly beefy football players want to eat me alive! There isn’t enough soap in this city and state and country and continent and universe to clean their germs off of me. I want to march up to every beef-smelling, flesh-eating zombie and yell, "GET OFF MY BISCUIT!"

But they'd kill me.

So, good luck, Kate and Aaron. From now, I’m staying in my room. 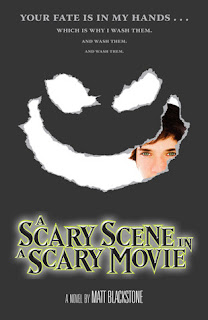 Rene, an obsessive-compulsive fourteen year old, smells his hands and wears a Batman cape when he’s nervous. If he picks up a face-down coin, moves a muscle when the time adds up to thirteen (7:42 is bad luck because 7 + 4 + 2 = 13), or washes his body parts in the wrong order, Rene or someone close to him will break a bone, contract a deadly virus, and/or die a slow and painful death like someone in a scary scene in scary movie. Rene’s new and only friend tutors him in the art of playing it cool, but that’s not as easy as Gio makes it sound.

I think this post is the sauce of awesome, don't you? And who is looking forward to A SCARY SCENE IN A SCARY MOVIE as much as I am?

Thanks for visiting, Matt!
Posted by Carrie Harris at 7:31 AM

HA!! Made of awesome sauce! Cannot WAIT to get my hands on this book, Matt!*psst, yours too, Carrie*

Okay, now I'm going to have to add Scary Scene in a Scary Movie to my 'to read' pile which - by the way - is now taller than my house.

LOVED IT! And that book sounds really really interesting. :) Thanks for sharing!

Reading about something like that in THE BOOK OF LOST THINGS. Didn't know it was so common. Adding to my eternal TBR.