Written in the Mitten and other things

First, if we're friends on Twitter or Facebook (and if we're not, WHY NOT?), you've probably already heard me babbling about this whole Written in the Mitten thing. But for those of you who haven't, I shall make the ultimate sacrifice and babble about it again. (Oh, who am I kidding? We all know I love the babble.) Anyway, I'm going to be ALL THE PLACES this weekend, with lots of other awesome Michigan YA authors! Come see us talk pseudo smack at each other, and pretend we know what we're talking about, and, if the last signing I attended is any indication, make lots of boob jokes.

We even have a POSTER. 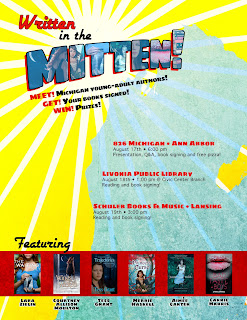 Come see us in Ann Arbor, Livonia, or Lansing this week! You know you want to.

In other news, I'm still doing the reading thing and enjoying the books, although you're probably as burnt out hearing about them as I am writing about them. But I promised I'd do it, and I'm stubborn as all heck. So here's what I've been reading:

32. The League of Extraordinary Gentlemen, Vol 1 by Alan Moore
Yeah, I've been on a Moore kick lately. I rarely say that I want the book to be more like the movie, but in this case, I just want a little more Dorian Gray. Because he's awesome.

33. Men at Arms by Terry Prachett
There are only a few Discworld novels that I haven't read, and I'm rationing them. Seriously. I can't stand to live in a world where there are no more Discworld books for me to read. It's been a little over a year since I read a new one, so I treated myself. And it was AWESOME.

34. The Waiting Sky by Lara Zielin
Lara is one of the authors who will be at the Written in the Mitten event, and she's also the SUPER GEENIUS behind the Ryan Gosling publishing tumblr, but she also happens to write these crazy good contemporary books that make me cry.

35. The Last Dragonslayer by Jasper Fforde
Jasper Fforde is one of my humor idols; I met him shortly after I sold Bad Taste in Boys and stammered like a total idiot, and he probably thought I was a doof but kindly signed a congratulatory message in my book. This book is adorably funny. It reminds me a lot of the Diana Wynne Jones books, which are AWESOME.

36. The Ferryman by Christopher Golden
It's been a while since I tackled a straight horror book, and I'm glad I did. This one reminded me a bit of Salem's Lot by King; it's got that old school horror feel that I love. Scary without being too gross, although there's a bit in there. I picked up another book by him for next week.

37. Starters by Lissa Price
Definitely a lot to like for the dystopian fan. And enough of a resolution that I didn't want to scream, while still dropping a few bombs that made me itch for book two.

38. Greywalker by Kat Richardson
This was an interesting read for me; it takes en medias res quite literally and throws you into the middle of the main character's murder and subsequent return to life. Harper's understandably a little disoriented by this, so I found the first few chapters a little tough to follow, but once she got her feet under her, we were introduced to the kind of urban fantasy world I love. I'm interested to see how it develops through the series.

39. The Space Between by Brenna Yovanoff
I found this really interesting; both demons and angels are capable of free will, which means they're less black and white and more shades of grey. And Brenna has this knack with anti-heroes that I totally envy.

40. Croak by Gina Damico
This was a freaking awesome Grim Reaper book, but the cliffhanger! AAAAAAAAHOWCANIWAITUNTILTHENEXTBOOKCOMESOUT?!?!

41. Food, Girls, and Other Things I Can't Have by Allen Zadoff
I love underdog books, and this is a great one that reminded me a lot of what it was like to read PART TIME INDIAN. I couldn't figure out if I wanted to laugh or cry and ended up doing both at the same time, which is really difficult.

This Week in Reading

It's getting down to the wire, and I think I'll JUST make this summer's reading goals. How about you?

Got some good stuff to recommend this week. Here's what I read:

27. The Chinatown Death Cloud Peril by Paul Malmont
This is some of the pulpiest pulp I've ever read. When Walter Gibson (creator of the Shadow) and Lester Dent (creator of Doc Savage) meet up with L. Ron Hubbard to investigate the mysterious death of H.P. Lovecraft, PULP ENSUES. GO FIGURE.

28. Excalibur: The Legend of King Arthur by Tony Lee and Sam Hart
This graphic novel makes Arthurian legend accessible to people not entirely inclined to tackle the Morte. I've seen a few complaints that the book leaves out a lot of awesome stuff, but it's ONE short volume. Think of it as a taster to the legends that might open the door to Arthurian fandom to come.

29. Nick and Norah's Infinite Playlist by Rachel Cohn and David Levithan
Here's another book that has been on my to-read list for way too freaking long. This one's definitely for the more mature teen--the f-bombs fall like cats and dogs--but it's a love song to music and that perfect night when everything seems to click between two people. If it's still on your to-read list and you're a fan of edgy contemporary, bump it the heck up on the list already!

30. Dead To Me by Anton Strout
Yeah, I admit I'm a fan of urban fantasy starring snarky male protagonists. I ADMIT IT. For me, this was a bit of a slow start, with main character and touch-psychic Simon bumbling about like a bull in a china shop, but the introduction of an equal rights for cultist organization shook things up (and tickled the heck out of my funny bone). I'm interested to see where the next book goes.

31. Dealing with Dragons by Patricia Wrede
This is one of the most adorable MG fantasies I've ever read. HOW HAVE I NOT READ THIS BEFORE? I'll be giving this one to my girls when they're old enough, because I am all for stories with non-airheaded princesses.

YES, I AM TAUNTING YOU.
Posted by Carrie Harris at 8:57 AM 2 comments: