Too many good things in the world and not enough time to tell you about them fully because I need to go tease my hair. It's Halloween, after all, and since I pretend every day is Halloween, when it's really Halloween, I need to go big to differentiate. 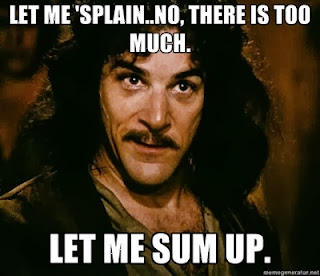 EXCITEMENT 1: My son turns 10 today! DOUBLE HOLIDAY WITH DOUBLE DIGITS. He's the best. He used to look like this, but now he doesn't. Well, he still makes that face, but it's bigger and with more orthodontia now. Also, he's awesome. I love being a mom in general and his mom in particular. 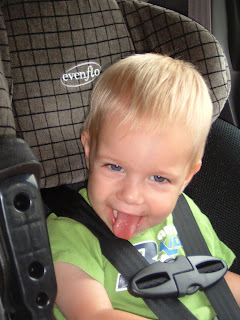 EXCITEMENT 2: Lots of new Carrie books are coming! The Bad Hair Day paperback releases November 12, and Sally Slick and the Steel Syndicate is starting to ship EARLY from the Evil Hat store. WOOP! Ordering there will net you a free ebook copy along with the printed one, so your ereader won't go hungry. The Young Centurions RPG, which will allow you to play in the same world as Sally Slick and the Steel Syndicate, is in the editing stage, so you should see that in the early stages of 2014! WOOP WOOP! And I just saw the full book jacket for Demon Derby, which means ARCs should follow soon-ish. ALL THE WOOPS! 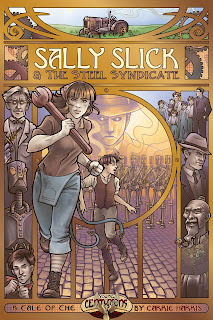 EXCITEMENT 3: Furthermore, a NEW new Carrie book will be coming out sometime next year! That's right, peeps! I sold another one, and this is a bit of a new direction for me, so I'm crazy excited. I'm writing a tie-in book for War of Ashes, which is currently a miniature game, will soon be an RPG, and hopefully will go in even more exciting directions after that. The War of Ashes world is "grimsical," and let me tell you--after I heard THAT I pretty much prostrated myself on the floor and refused to move until they let me write a book there. The WoA world is kind of like the love child of Tim Burton and Terry Prachett...populated by Muppets with pointy objects. 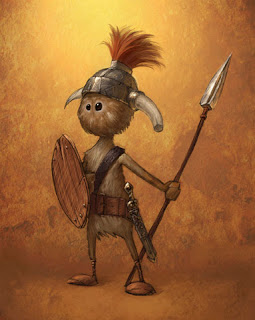 It's probably important for me to say that this book will be adult in the same way that Terry Prachett is "adult." In other words, it'll be longer than my other ones, and there might be a few swear words in it. There will likely be jokes in it that kids won't get but should generally be safe as long as they're interested. So what's it about? I'm glad you asked! Here's the pitch:

War of Ashes: Off on a Ylark:

Gicca Nummus is the Senior Ylark Handler of the village of Dumas. It’s a prestigious position, and he’d be thrilled if he hadn’t just left a more prestigious position designing Things That Do Things—machines—for the priests of Ilunui. But his elder brother Ficca is the new priest of Dumas, and someone has to keep that cheese-brain from burning down the village where they grew up.

Elani Usus has a similar problem. She’d much rather be anywhere but Dumas, doing anything other than serving unending drafts of kogg in the inn. But her father, Lukkus, is the town elder, and he deals with things he doesn’t understand by faking it. Badly. The idea that his little fawny-wawny might want to do anything other than pour kogg? It doesn’t compute. After all, the blubber-noggin can’t count past three. And uses phrases like “fawny-wawny.”

When the first wave of the Vidaar fleet appears in the great sea to the south, Gicca and Elani have to step up. If they leave the village’s defense to their relatives, the whole town of Dumas is going to explode. Or be enslaved. Or explode, be enslaved, and then explode again for good measure.

His inventions and her leadership skills turn the tide of battle and save the town despite the bumbling efforts of Ficca and Lukkus. All they manage to do is burn down the inn and cover the enemy with cheese curds. But the defense of Dumas is just the beginning. Someone has to get to Ilunui. Someone has to alert the Houselords. And most of all, someone has to keep those dumbasses from burning Dumas.

Exciting, right? This should explain why--despite repeated promises that I'll do it more often--I haven't been blogging. I've been writing books instead, and I hope that's cool with you. :)

I have to send out a thank you to Josh at Zombiesmith, creator of War of Ashes, for letting me live in his world for a while. And to my brothers-from-another-mother at Evil Hat, for recommending me to him in the first place and failing to mention the part where I'm an over excitable diva.

So, in celebration of all this awesome, I'm throwing a party! First, we're going to dance like this...

Then I'm going to give out ALL THE BOOKS. Signed copies of Bad Taste in Boys, Bad Hair Day, and Sally Slick and the Steel Syndicate. Enter before November 8th to win!

a Rafflecopter giveaway
Posted by Carrie Harris at 1:09 PM 11 comments: