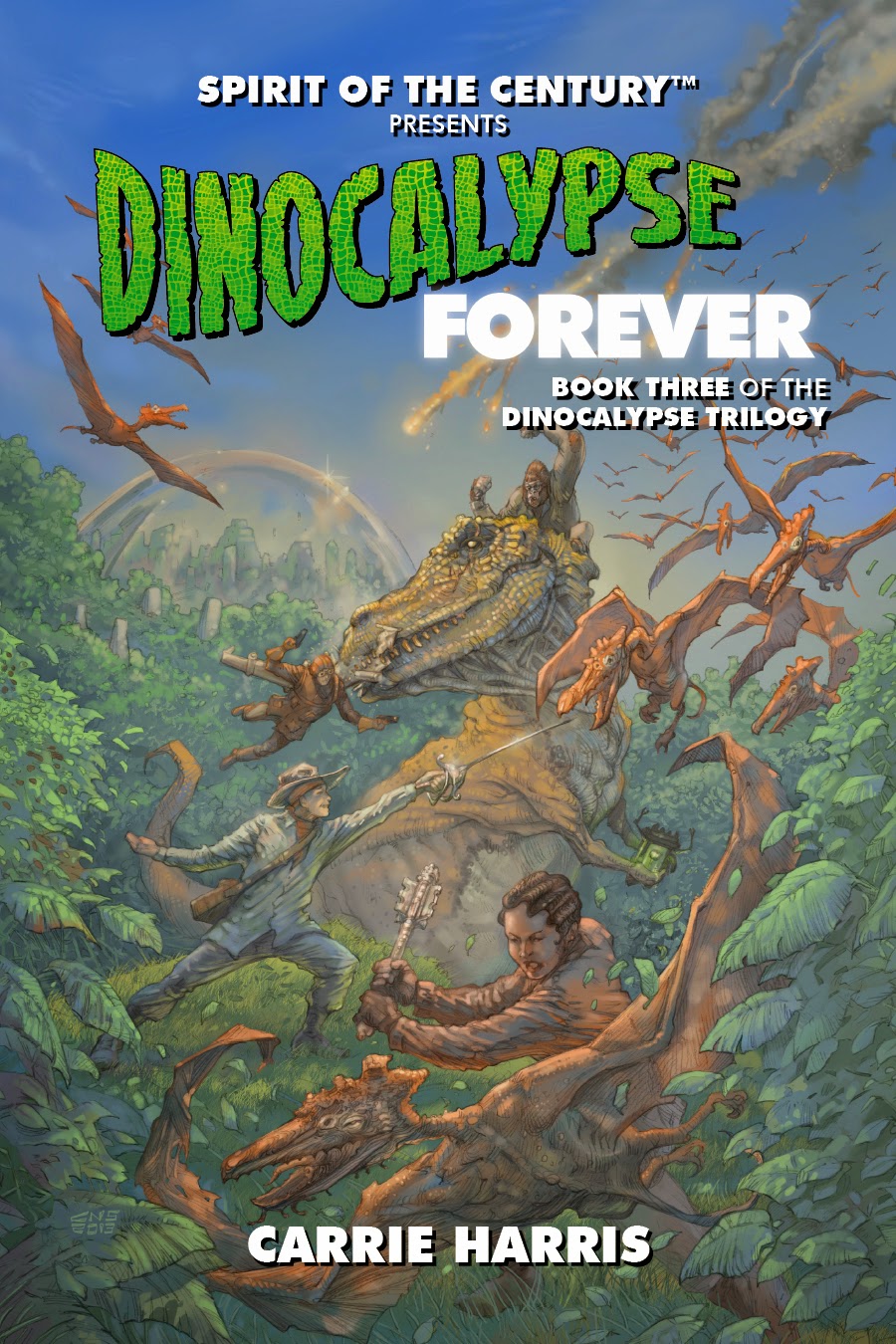 Today, I got a big box full of my next book, Dinocalypse Forever, and sweet holy heck is it gorgeous. I haven’t talked about it a whole lot just yet since I wasn’t sure when it was going to hit the shelves. (It’ll get there in the next month or so—I’ll tell you more when I know.) Plus I have to admit something.

I was kinda scared. Because Dinocalypse Forever was the hardest thing I’ve ever written.

This book came into my life at a time when I felt very strongly like a crap writer who wrote crap things that were…well, CRAP. I distinctly remember volunteering to do it and writing the first chapter and then thinking that I might as well go find a nice sword to fall on because there was no way I was going to be able to do this thing justice. I vacillated between intense excitement and abject terror every time I sat down to write pages. And honestly, there was more terror than excitement. I was struggling to write in general, and this was a tough book on its own without the writerly crisis of confidence.

See, Dinocalypse is the third book in a series, and the first two were written by Chuck Effing Wendig. (I have it on good authority that that is in fact his middle name.) Chuck had a scheduling conflict and wasn’t able to write the third book, and my co-conspirators at Evil Hat tapped me as a replacement. For Chuck Effing Wendig. I was flattered. I was terrified. But more than anything, I wanted so badly to do justice to a job given to me people I respect and care about. The guys at Evil Hat are my brothers. It’s more than just a job for me, and that was the thing that scared me the most. That I would let Fred and Chris and the rest of the crew down. That I wouldn’t be able to step into Chuck’s crazy-big shoes. That they would be disappointed. That this series would become the project they regretted because the end was such a letdown.

There was no way to talk about all of this during the whole thing, because to confront it head-on would have paralyzed me. I just had to write. To put the words on the page and hate them but keep on going. And then, afterwards, to read it and think, “Hey, this isn’t as crappy as I thought. It’s even kind of…good?” To grow to love it despite myself and to laugh at the laughable bits and cheer when the bad guys get punched as bad guys should.

Seeing your new book for the first time is always kind of surreal. There’s this weird magical hoodoo that happens somewhere between final edits and the arrival of that box on your doorstep. The words magically transforms from this thing that belongs to you into a real book that other people can own and love (or hate). Something outside of you, over which you no longer have control. So it’s always exciting and scary, but this time was different. This book is different. It’s about heroes that won’t give up despite terrible odds involving psychic dinosaurs and brains in jars. And now that I’m on the flipside, I feel pretty fucking good about it.

If you haven’t read the first two books, I recommend them so highly. They’re high-octane, high-stakes, full-on-crazy-fun. And I sure as heck hope that you think Dinocalypse Forever does the series justice.

I wrote it, and I’m pretty damned proud of it.
Posted by Carrie Harris at 9:36 AM 5 comments: