Happy Bookanista Thursday! In case you haven't heard of us, I've written a limerick to tell you what we do:

Once there were writers online,
Who read books that were so very fine,
So they gabbed and they jawed
And were so very awed
That they recommended them to everybody and did something else that rhymes with fine.

You would probably be surprised to learn that when I began writing, I started with poetry.

Anyway. Today's book is Memento Nora by fellow Class of 2k11er and all around cool person Angie Smibert. I knew we were kindred souls when I learned that she's into Ninja Warrior and Face Off, which are two of the coolest shows on television EVER. Here's a little about the book: 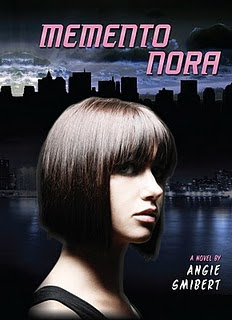 Nora, the popular girl and happy consumer, witnesses a horrific bombing on a shopping trip with her mother. In Nora’s near-future world, terrorism is so commonplace that she can pop one little white pill to forget and go on like nothing ever happened. However, when Nora makes her first trip to a Therapeutic Forgetting Clinic, she learns what her mother, a frequent forgetter, has been frequently forgetting. Nora secretly spits out the pill and holds on to her memories. The memory of the bombing as well as her mother’s secret and her budding awareness of the world outside her little clique make it increasingly difficult for Nora to cope. She turns to two new friends, each with their own reasons to remember, and together they share their experiences with their classmates through an underground comic. They soon learn, though, they can’t get away with remembering.

Now in honor of Memento Nora's release, Angie is giving away a super cool prize pack, which includes a signed copy of the book, tattoos, stickers, bookmarks, "forgetting pills" aka Jelly Bellies, and a totally glossy bracelet. To enter, comment on this post, Angie's blog, and her other blog tour stops, which you can get to via Angie's blog. Every comment gets you an entry, which is crazy cool.

And in honor of this frabjous occasion, I'm going to tell you a story I never want to forget--

I call my best friend Monster, which is strangely fitting considering that I'm obsessed with them. But don't YOU call her that, because she'll only put up with it from a few people--like me. Her husband (who goes by the best nickname ever--The Electric Lovitz). Her family. Anyway, in the years before children, we used to travel together.

Know how some people just mesh when it comes to traveling? We do. Monster and I like to do the same things, but we're also not afraid to spend an afternoon apart. And she's just as crazy as I am.

So you won't be surprised to know that our Puerta Vallarta trip was full of some of the silliest things. We took our Spice Girl barbies to the pool with us and set them out on lounge chairs. We held a diving competition and threw them into the water. I still maintain to this day that Posh totally PWNED Baby.

But the memory that sticks out to me the most was the night we went to the salsa club. We were watching the dancers when two guys asked us if we wanted to try it, and we explained that we'd be happy to dance but weren't interested in anything else. In other words, if you're looking for easy American girls, we aren't it, guys.

They seemed fine with that.

Uh oh. Time to go. I looked over at Monster, who was pretty much in the same predicament, and it was one of those wordless moments of communication--it was time to go. We started making excuses. Wow, we were tired, and we had things to do tomorrow, and my foot hurt, and WE WERE LEAVING.

They offered us a ride.

Now, we are not stupid people. There was no way we were getting into that car, no way AT ALL. Now our polite refusals turned into a flat out NO, and we linked hands and left. The only way anyone was going to separate us was with a crowbar.

We walked back to our hotel, which wasn't far down a very crowded road and literally had a guy with a machine gun stationed outside the door. We were safe, so now we could laugh about it. The hotel was in sight. And we wouldn't be going back to that salsa club. NO FREAKING WAY.

A car sped to a stop next to us, and out came the guys. Now I was freaked. They'd actually gotten their car and followed us. WTF?!? We walked around the car; they begged us to let them come in to our hotel room.

When we started laughing hysterically, they left. To this day, I wonder if they used that line on anyone else who said, "Oh, I love guys who poop. Come on in."

It was scary, yes, but I didn't feel scared. I felt like Monster and I were in this together, and we'd get out together. I felt like we could deal with anything, as long as we were together. Even pooping stalker boys.

It's a memory I never want to forget, even if it was frightening. No way would I ever give it up, although I think the concept of it, and Memento Nora itself, is tremendously fascinating.

So don't forget to check out Memento Nora, and while you're at it, here are some more great Bookanista recommendations!

Posted by Carrie Harris at 8:11 AM

I hadn't heard of this book. Sounds like a cool one.

As for the Puerto Vallarta story, I can't believe he tried to get in by telling you he had to poop!

Love the pooping stalker boys. Well, not love. I'm glad you drove them off with laughter! Thanks for sharing!

Possibly the funniest thing I've ever read in my life. I'm going to try taking some deep breaths now.

Several years ago I had a stalker ex-boyfriend, and in the middle of all the scariness I remember my mother and I listening to a message he left on my answering machine where he said I had to help him because he didn't have anything to eat and he was feeling weak - this was all said in a very dramatic way. My mom and I looked at each other and burst out laughing.

OMG....and they thought that would make you let them in??

I need to meet your friend.And, oh, those darn pooping Mexicans! This is my favourite story. It's so funny. ;)

OMG, that is such a freaking awesome memory. I cannot stop laughing about it. Yes, I'm one of those people. I laugh at poop jokes. I can't help it. Especially memories that are real with real poop.

The book has such a great premise. I can't wait to read this one.

Needing to poop is serious. I hope he made it.

This book sounds really good and different! I weep over the length of my TBR list. Ok, not really weep but you know...whine.

I wonder if that line ever got them in some poor girl's hotel room?
It sounds like you two had a lot of fun.
d.septer at insightbb.com

I mean, I can understand his predicament. Think about it - he basically eats nothing but Taco Bell. I'd have to poop a lot too.

'Course, I'd probably just take to walking around in these things.

Also, if he really did have to go that badly, it may have ended up like this

OMG, that's hilarious. I couldn't forget that either!!

So glad Angie's book is nearly out in the world. I can't wait to read it!

Oh my pooping stalker boys! That is scary and insane and slightly funny, while still a little scary. Thank goodness you had your friend with you.

And Memento Nora has been on my wishlist forever! I cannot wait for it to come out.