I have three kids, so I'm an expert at multitasking. When the twins were little, I learned that you CAN turn the pages of a book with your feet while you feed the babies with your hands. I can edit and cook dinner, sometimes without burning. And I can do Bookanista Thursday AND Cybils at the same time.

You HAVE gotten in your nominations for the Cybils, right? Saturday is the last day to get them in. RUN FORTH AND NOMINATE, PEOPLE!

And in the spirit of multitaskery, I am recommending a book that COINCIDENTALLY is a Cybils nominee. HOW DO THESE THINGS HAPPEN? Fate? Luck? Massive laziness? It's your call.

Today's book is DON'T STOP NOW by Julie Halpern.
On the first day of Lillian 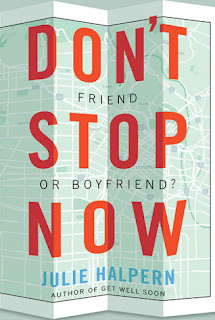 ’s summer-before-college, she gets a message on her cell from her sort-of friend, Penny. Not only has Penny faked her own kidnapping, but Lil is the only one who figures it out. She knows that Penny’s home life has been rough, and that her boyfriend may be abusive. Soon, Penny’s family, the local police, and even the FBI are grilling Lil, and she decides to head out to Oregon, where Penny has mentioned an acquaintance. And who better to road-trip across the country with than Lil’s BFF, Josh. But here’s the thing: Lil loves Josh. And Josh doesn’t want to “ruin” their amazing friendship.

Josh has a car and his dad’s credit card. Lil has her cellphone and a hunch about where Penny is hiding. There’s something else she needs to find: Are she and Josh meant to be together?

This book has a road trip, cheese shirts, romantic tension, more cheese shirts, hotel rooms decorated like space stations, witty banter, and did I mention the cheese shirts? Unfortunately, the thing I liked the most about the book is the ending, and I refuse to be one of those spoilery types who spills it all. But I will say that the ending is not neat. It's not tidy. It's not romanticized. And I really respected the decision to write it that way.

Ultimately, this book was less about the search for Penny (which struck me as an excuse more than a mission) and more about Lil's desire to stop time before she goes to college and possibly loses Josh forever.

Have you read this one? I'd love to hear about it. And while you're at it, check out the rest of the Bookanista awesome:

Carolina Valdez Miller steps up to Audition – with giveaway

Shana Silver contemplates The Future of Us

Shelli Johannes-Wells is psyched for some swell book launches!
Posted by Carrie Harris at 8:48 AM

Thought you would want to see my review for your book:http://ghostofthestill.blogspot.com/2011/10/br-bad-taste-in-boys.html