Sorry. I've just given MYSELF an earworm, and I wanted to share the love. We're going all monster disco up in here. 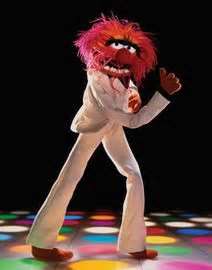 Kind of like this only not as awesome, because nothing is as awesome as this.

Anyway. I'm extra excited today, because I've gotten the okay to share the jacket copy for DEMON DERBY...and we'll be revealing the cover in just a few weeks! First, la copy. I know I've been talking about this one for a while, and usually the excitement makes me so incoherent that in all likelihood you have no idea what the bleeping thing is about. Here. This will clear it all up.

Casey hates being known as the girl who survived cancer. She wants people to treat her like her old self, fearless and strong. And after a creepy encounter with a crazy guy in an alley, Casey is all about reclaiming her power.

So when she has a chance to try out for the Apocalypsies roller derby team, she jumps on it. Being a derby girl would prove that she doesn’t need anybody’s pity. It doesn’t hurt that Michael, the team manager, is almost unnaturally hot. Which makes sense when Casey finds out that he’s not even human.

Michael’s got a secret: he trains demon hunters. That crazy guy in the alley? Demon. And the fact that Casey went head to head with evil and lived makes her a threat to demonkind. Casey thought she’d already fought and won the battle of her lifetime. But it’s only beginning. . . .

From Carrie Harris, author of Bad Taste in Boys and Bad Hair Day, comes a knockout new read for anyone facing their own demons—inside and out.

Er...yeah. Anyway, as you might imagine, I was pretty neurotic about the cover for this book. It's such a special book to me (and yeah, all my book-kids are special, and you're not supposed to have a favorite, but SUE ME IT'S MY FAVORITE). I try not to get the covers all built up in my head, but of course I do it anyway, and I quite literally had heart palpitations when I opened the file for the first time.

Guys, it's PERFECT. It's the most awesome cover in the history of the universe, and there are demony shadows on it, and fire, and roller skates, and AWESOME. Did I mention it's awesome?

Anyway, I'm so excited about this that I wanted to plaster it all over the internet so I can go to blogs and SQUEAL with ALL THE PEOPLE. Would you like to sign up so I can squeal at you? (Hrgh. That sounded wrong. But you know what I mean, right?) Go here to sign up to participate!
Posted by Carrie Harris at 10:01 AM

The book sounds awesome! I can't wait to read it :)

That sounds so exciting! :D I can't wait to see it.

This sounds awesome! So excited for you, Carrie!

I CANNOT wait to read this! It sounds epic and amazing and...and... *squee!*

Squeeing for you! The book sounds fantastic--can't wait until it's released (awesome cover and all)!

Awesome! I've signed my blog up for the cover reveal!! :)

So cool. The synopsis sounds great, and your books are amazing anyway. Instant pre-order. I don't even need to see the cover (though that would be awesome too). Congrats Carrie!!! Can't wait to get my hands on it!