Bookanistas: The Lipstick Laws with a GIVEAWAY!

Happy Bookanista Thursday! If I was the Hulk, I would describe the Bookanistas as follows: "Me read book! Me like! Me tell you. Me eat book later and get indigestion." Or something like that. Anyway, there's a whole group of us who like to gush about our recent reads, and we are going to be giving a LOT of things away throughout the month, so please scroll down and read all about it. Today, my featured book is THE LIPSTICK LAWS, by my cosmic twin and Class of 2k11 buddy Amy Holder. And now I shall bring the deets! 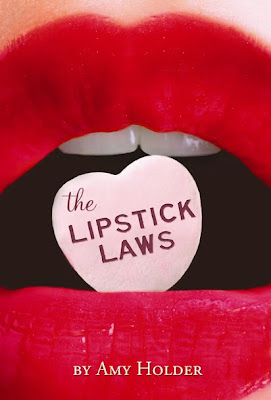 At Penford High School, Britney Taylor is the queen bee. She dates whomever she likes, rules over her inner circle of friends like Genghis Khan, and can ruin anyone's life with a snap of perfectly manicured fingers. Just ask the unfortunate few who have crossed her. For April Bowers, Britney is also the answer to her prayers. April is so unpopular, kids don't even know she exists. But one lunch spent at Britney's table, and April is basking in the glow of popularity. But Britney's friendship comes with a high price tag. How much is April willing to pay?

This is the kind of book I would have loved back in junior high, because I was totally an April. I think she's the kind of protagonist we can all relate to on some level--she feels awkward and unsure of who she wants to be; she wants to make friends but fears sticking her neck out and getting blasted for it. Who hasn't gone through those feelings? Who wouldn't want someone to show them the ropes, whether they're in high school, at a new job, or taking their first steps into debut authordom?

Unfortunately for April, her rope-shower turns out to be an opinionated, hilariously misinformed snob who likes to play Rank-a-Skank at lunch. Britney is at turns nasty and laughable, so how harmful can she really be? Awfully harmful, as it turns out. And watching April grow a backbone and give Britney a taste of her own medicine was a heckload of fun.

The Lipstick Laws officially releases next Monday, and in honor of that momentous occasion, I'd like to give you two things.

First, a little advice. One of April's deepest kept secrets is that she's a bra stuffer. Coincidentally, I may have engaged in some bra stuffery back in the day, most of which was brought on by the time I walked into the kitchen at my grandma's only to find the entire family discussing the relative chest size of my cousin and I. Let's just say that they all agreed I was a distant second in terms of cup size. I was so humiliated that I tried stuffing. It turned out something like this: 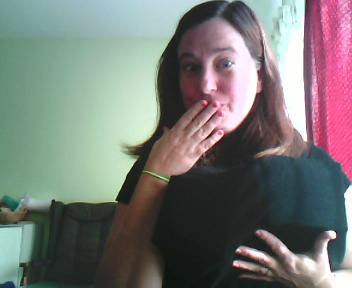 I highly recommend removing the kleenex from the box before stuffing your bra.

If that hasn't burnt out your retinas, I'd also like to give you the opportunity to win a signed copy of THE LIPSTICK LAWS! All you need to do is leave a comment to win. Simple, right? I'll choose a winner next Tuesday.

While we're talking about winning things, come back tomorrow for more prizes, and I also suggest stopping over at Jessi Kirby's blog. She's giving away lots of things in celebration of her upcoming release, MOONGLASS.

And here's the rest of the Bookanista love for the week:
Elana Johnson is mesmerized by Memento Nora
Christine Fonseca gives a Guestanista video review of 11 Birthdays
Jamie Harrington is giddy for Texas Gothic
Beth Revis features Between Shades of Gray all week--with giveaway!
Megan Miranda gushes over Blood Magic
Myra McEntire introduces "Bookanistas Give Back" - with prizes!
Jessi Kirby wants to be Like Mandarin
Bethany Wiggins Praises the Princess of the Midnight Ball
Gretchen McNeil sings about Spoiled
Rosemary Clement-Moore is ensnared by The Demon Trapper's Daughter
Sarah Frances Hardy delights in Divergent
Veronica Rossi marvels at Moonglass
Stasia Ward Kehoe raves about Rival
Posted by Carrie Harris at 8:52 AM

Carrie you just made me laugh out loud. At 6:30AM, before I've had a cup of coffee. Thank you. And Lipstick Laws sounds like a fun read!

The stuffing...kleenex box included...is hilarious. I will stop back throughout the day whenever I need a smile.

And I'm lucky enough to have read LIPSTICK and it's lip-smackingly good. :-)

There's even one scene in Lipstick Laws that reminds me of Jane Austen's Emma - but Carrie would have said that in a way that would make you laugh instead of just going "hmmm."

HA! - if only every morning could start out like this! Nice look, Carrie - but ouch! that doesn't look comfy!!

I agree - The Lipstick Laws is a great read!

I LOVED The Lipstick Laws! People would be crazy to not want this BOOK!!!

I haven't read this one yet but I've read tons of good reviews about it.

Loved the photo. It would go under "things that make me snort".

I've had my eye on this book for a while! YAY for this fun giveaway! :-)

oh my gosh, that klenex box just made me bust up laughing

Great post! Book sounds very interesting and the cover is amazing.
Count me if it's international giveaway.

Hulk quotes! I love you! =D

I can't say I've ever had the need to stuff my bra... I used to be flat chested until 15 but never felt the need to... XD

I want to read it

The photo of Stuffing The Kleenex Box is priceless.

Lipstick Laws sounds like a fun read. Thanks for the giveaway.
d.septer at insightbb.com

OMG. Love it!! You need to substitute the little dollar travel tissue packets for the box, though! :P

Carrie you forgot to stuff the otherside! To advoid public humilation and suspicion of being a bra-stuffer I highly recomend you to do both sides ;P

BTW, taking the box out would be a good idea, box shaped boobs are still a little too futuristic!

I haven't read Lipstick Laws but it's on my bucket list!

The tissues still in the box might not blend in very well, but at least you're alive. Not the case for this guy and his Kill Basa.

I'm looking forward to this book!

Love the blog!! My daughter and I would love to read Lipstick Laws...also, I would love to share it in my Backyard Beauty and Book Boutique.http://thebackyardbeautyandbookboutique.blogspot.com/ What a great cover to display don't ya think? Thanks SO much for the opportunity...and I'm your newest follower
BLessings

Even after three kids, the need to stuff existed in my bra.As I tell my well developed daughter and daughter-in-law now, if it hadn't been for nibbles, I'd have been concave rather than convex(one of them is a math major). Definitely something I would get a kick out of reading.
(\___/)
(='.'=)
(")_(")

thanks for the giveaway, it'll the perfect gift...!

thanks for the giveaway, it'll the perfect gift'

COUNT ME IN! This book sounds amazing =D

Oops, left out my email:

next Monday? waiting for that ;p

Thanks for your article.please write on custom 120ml dropper bottle boxes design elements.

business listing in an online
business directory helps your organization to enhance your website visibility.

Write For us said...

Hello There. I found your blog using google. This is a very well written article. I'll be sure to bookmark it and come back to read more of your useful information. Thanks for the post. I will definitely return. If you want write for us please visit here:mobile app development guest post

I’m truly enjoying the design and layout of your website. It’s a very easy
on the eyes which makes it much more enjoyable for me to come here and visit more often. Did you hire out a designer to create your theme?
Exceptional work!

Tom Cruise married Katie Holmes; she was the third wife of tom, but Isabella Jane Cruise was not that much connected with tom’s third wife, and she did not accept her as a mother.

write for us technology said...

Hello There. I found your blog using google. This is a very well written article. I'll be sure to bookmark it and come back to read more of your useful information. Thanks for the post. I will definitely return. If you want write for us please visit here:write for us technology