The Wonder That Is My Blogaversary 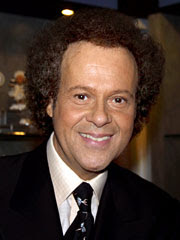 I look just as snazzy in a suit as I do in shorts. Of course, I'm still wearing the shorts with this sports jacket.
Actually, I have a confession to make: I wrote The Simm a fan letter. If he responds, I will of course share with y'all. Because really, what better way to celebrate my blogaversary than with the Words of the Simm?

The Simm is Made of Hilarious.

Unfortunately, there's a dark side to this story. You see, Spock is feeling left out. Poor Spock. He couldn't stand up to the awesomeness that is Richard Simmons, and I think the pressure made him crack. This morning, I noticed someone sitting outside my house, speaking softly into a comlink and peering in the windows. That's right.

Some people have stalkers. I have a Spocker. 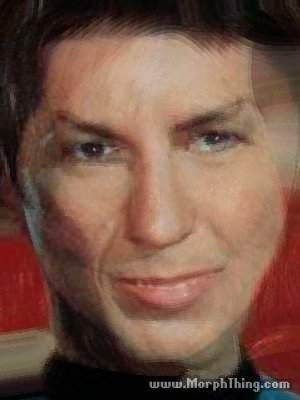 This is what happens when you put my face together with Spock's face. It's also the reason brain scrubbers were invented.

Soooooo. Let's get this party started, but please... if you spot the Spocker, do not approach him. He's very unstable and prone to attack anyone with curly hair or shorts. If you have both curly hair AND shorts, you're pretty much a goner.

I hope you'll all keep coming back for this week's party. We've got some more Twilight parody coming, completely with fishsticks, sparkles, and (ahem) merjuice. We've got new song lyrics about the wonders of blogging, and a bunch of other stuff that I haven't thought up yet. YAY, unspecified stuff!

I'm also running a drawing this week. Leave a comment on this post and tell me what makes you laugh. If you can't resist the urge to be a suckup and want to mention my blog, that's fine. But you don't have to. And if there are particular things in the blog that crack you up, I'd love to know! I will randomly pick one commenter on Friday, and they will win one book of their choice from Amazon ($10 or less, because I don't want to have to sell my children.) If you mention and link to the contest on your blog, Twitter, or Facebook, let me know in the comments. You'll get one extra entry for every shout out!

Whoopsie! Almost forgot that if you are a current follower, let me know. That's two extra entries. And if you become a new follower, that's one more!

Partay! Free books! Richard Simmons! It doesn't get much better than this.
Posted by Carrie Harris at 6:44 AM

Hi :)
Congratulations on the One Year Blogaversary!
What makes me laugh out loud is @maureenjohnson's Tweets, Katie Babs blog & her Mho, and Jenny the Bloggess.
:)
Love and best wishes,
twitter: @RKCharron
xoxo
PS - new member to your site.

The Simm looks so sophisticated and suave in the first picture....like he's going to church or something.....


Poor Spocker.....He porbably can't understand why he wasn't chosen. It's just not logical.

What makes me laught? Whose Line is it Anyway always make me laugh! I recently discovered your merpire. That definitely made me laugh. Especially the part with the kiddy pool and the fins brushing her leg. Genius!! My four-year-old frequently makes me laugh, epecially when he's imitating me. Nacho Libre always makes me laugh, but I have a strange obsession with all things Jack Black. And finally, I make myself laugh everyday. I'm one of those annoying people who crack myself up with jokes that nobody else finds half as funny as I do.

Long time reader, first time poster. So how come you weren't this funny back in the old days? I kid, I kid. Your blog (and tweets) are always good for a laugh.

PS - I think I've #followfriday'd you before, but I'll try to do it again this Friday (not that I could boos your numbers much)

Yay, new Twilight parody! That makes me laugh like crazy.

Something else that makes me laugh is the new movie Ponyo. There's one scene where the little girl, Ponyo, meets a baby. The mother says, "The baby likes you," and the camera focuses on the baby's face--and the baby looks completely baleful. He and Ponyo just look at each other for the longest time, and everyone in the audience was howling.

I guess you had to be there. Congrats on the blogaversary!

At this moment, Carrie, YOU make me laugh. Followed closely by Dickie. What a mascara-run inducing clip!

Okay, I admit it--I'm a suck up. Of course your blog makes me laugh. I'm a current follower, and I'll mention your party on my post tomorrow. Does that mean I have like 10 entries, or what?

ROCK. ON. Since I have stick-straight hair and can't wear shorts, I'll be nice and hang out with the Spocker so he'll leave you alone.

Things that make me laugh are you and Flight of the Conchords.

Also, I am very glad you blog and that we met and that B-NAG happened.

That first video made me laugh!

Looks like it's going to be a fun week.

The Richard is looking pretty schlick in his shirt and tie. Loved the video as I've been a Colin Mocherie fan for a long time. Congrats again, Carrie!

What makes me laugh until I spit? Your sparkly twilight parody series. When's the next installment?

Richard Simmons makes me laugh. Every time, without fail. Congrats on your blogaversary!

What makes me laugh? Your blog of course!

I can't believe I wasn't following you before...I'm here all the time!

I never leave your blog without a smile, grin, or chuckle. Did I mention you are made of awesome? O:)

Merjuice makes me laugh. Unspecified stuff is always funny too!

I'll say it again...YOU make me laugh. So does Napoleon Dynomite (best movie ever).

I'm linking to your blog, I'm a follower & I'll mention it on Facebook.

I just became a follower (and was astounded to find I wasn't already a follower...)

"The Spocker" made me laugh and so does "Whose Line is it Anyway?" And I never eat or drink anymore when I'm reading Stephanie Perkins' blog.

Courtney Summers never fails to make me laugh. And Whose Line Is It Anyway is hilarious!

You make me laugh out loud, as well as Robot Chicken.

Oh, and A Haunting in Connecticut.

I'm a suck up... Your blog make me laugh :) Other things that make me laugh are my family and Terry Pratchet. He's made of awesome.

Hmm, what makes me laugh...has to be my youngest son. He just turned four in June, and he's always saying and doing the funniest things. If I described them here, they would probably sound lame...it's something you have to see. :)

Ninjas dancing to ice cream and cake makes me laugh way too hard.

Plain silliness and funny sarcasm make me giggle. And your blog! :)

WOO HOO! Happy Blogaversary! I'm happy for The Simm, but I must admit, I'm already feeling stalker-like tendencies towards your Spocker. (Too. Awesome.)

Something that makes me laugh: My husband's toenails, which I recently painted bright red with sparkles.

He is a very good sport.

It cracks me up that Richard Simmons put on a suit to come to your party -- or was it a disguise to avoid the wrath of the Spocker??

Oh, and if I think way back to my college days my word verification cracks me up too: "fratisms". I think your blog gets special verifications! :-)

This makes me laugh every time:

The sound that Gimli makes when he throws his arms in the air is priceless!

I also follow you. Or stalk you. But we already discussed that long ago, didn't we? (Dinner looked delicious. You really should invite me inside next time.)

Congratulations on the One Year Anniversary! That definitely made me laugh. Your blog (and tweets) are always good for a laugh.

--
glovin
Home Security Systems no CREDIT CHECK everyone is approved