I have a confession to make. I have a sekrit pompadour fetish.

Okay, maybe it's not so sekrit. After all, I did put a pompadour on Slayer's Guitar Hero guy. I put a character with a pompadour in my superhero book. Every time I see a person with a pompadour, I say something like, "OooOOOOoooh! A pompadour!" So maybe it's more accurate to say that I have a not-so-sekrit pompadour fetish.

Why? Let me show you something... 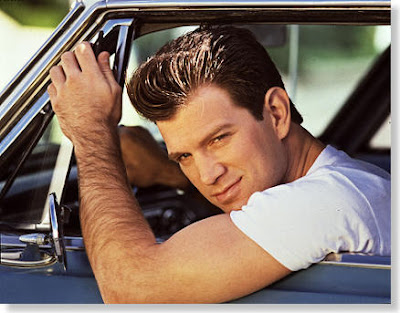 My hair, it is so sexy. And kewl. And it can be used as a slide for small woodland creatures.

Now, please contrast that with this: 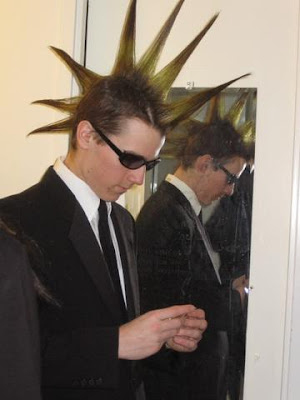 My hair says one thing and one thing only: if you fall asleep next to me, you will wake up with only one eye.
Nuff said.

There's only one bad thing about a pompadour as far as I can tell. See, in order to get the necessary height for pompadorian kewlness, you've got to use a lot of gunk in your hair. There is no running of the fingers through a pompadour. Trust me, I've tried it. It feels kind of like you're running your fingers through a broom dipped in syrup.

If you've got a syrup-covered broom fetish, you're in some serious trouble. And this is coming from the girl with the not-so-sekrit pompadour fetish, so you know it's bad.

In other news, it looks like No Pain will be out in the world sometime around Summer of 2011. So you have plenty of time to save your pennies.
Posted by Carrie Harris at 6:25 AM

I believe I shall need lots of pennies because I may be required to buy more than one copy.

I don't have to worry about what style to put my hair in, but neither does Homer Simpson.

The only downside to a pompadour is that it's pretty much guaranteed that the dude is spending WAY more time on his hair than I spend on my hair and that always worries me on many levels.

The broom thing is true. This is why I use bobby pins to get my pomps. So much less mess. But I suppose it is completely unsexy for a guy to wear bobby pins. It would definitely contradict the manliness.

Do any of your characters in No Pain have a pompadour?

Two things:
1. I was friends with a woman who dated the guitar player for Chris Isaak. She got me back stage to party with him and the band at the height of his Wicked Game song and the height of his uber hotness. Good news, dear Carrie, his pompadour was spectacular up close. I do believe I drooled a wee bit.

2. I used to have a real mowhawk my senior year of high school. Not a pencil mowhawk like the dude in your photo but one that I used to stand straight up and spray the ever-loving-life out of with Aqua Net hairspray. It was white and then, for giggles, I dyed it jet black. I loved my mowhawk. A lot.

How can you mention the pomp and have NO pictures of Johnny Bravo?

This is a very timely entry. Are your ears burning ; )

2. My vice principal in high school had a pompadour, no lie. It still gives me nightmares.

Cate: You are officially one of my favorite people in the world right now.

Jamie: Uh... Jamie? I hate to break this to you, but Homer isn't real. Really.

Lisa and Laura: That's true. And really, I'm not into high maintenance, except when it comes to pompadours. Because really, it's worth it.

Empress: See, I tried that, but I have way too much hair. I'm egg whites or nothing.

Barry: Mops have their places, I have to admit. :) And I'm not talking about the floor here either.

Kelly: Actually, they don't. I wanted to do one, but there's a fairly major character in Superbly Useless that has one, and I didn't want to go overboard, pompadour wise. As if that's possible.

KM: I hate you. I mean, really hate you. Because right now? Yeah, I'm salivating. I don't feel too bad about this, because Slayer salivates at the Wicked Game video. For entirely different reasons, of course.

Jamie: Gosh, that's true. But I get so distracted by Chris Isaac. Like, VERY distracted.

i bet your slayer falls asleep pompadour-less and wakes up pompadour pretty.

Ooh, tell me you didn't love Shia's hair in the most recent "Indiana Jones". Oh Shia.

I'm excited for the summer of 2011. Did any of us know that it took so long to put a book out before getting into this industry? I had no idea. :)

My daughter had a pompadour when she was a baby. It wasn't intentional, it's just the way her hair went until she had more, but it sure cracked us up!

Maybe Bump Its would come in handy here.
And the news of No Pain is awesome.

And this is why we are friends.

You know, I found this page by searching Google for "broom fetish." You're one of the top results! Amazingly, I didn't see any porn in the results. Only a matter of time I'm sure. I don't want to think about it. The only reason I searched for "broom fetish," (I know you're anxiously fearing this answer), is because I needed to test my Internet connection because apparently my router spent the evening drinking a tall, foamy mug of suck, and decided that dereliction of duty was in order. So I reset it and then wanted to hit Google to see if it straightened out its attitude yet. I always use the searchbox build right into Firefox and I was tired of typing in random crap just to get Google to load. (You'd be surprised how many results there are for "asdf.") Due to some unknown neurological pathology I thought to try "broom fetish." And here I am.

So, nice story about pompadours. I think they look keen too. Always liked the way Chris Isaak's looked. I also especially was tickled by your caption to the spiked mohawk photo. Part of me thinks that spiked mohawks are kick ass, while another part of me thinks they are ridiculously overt statements of juvenile rebellion. Sometimes I can't decide which I think, but probably most of the time they rank as pretty awesome. Especially if someone can manage to drive with one. And in the end they are less ridiculous, and less permanent, than putting a piercing in your lip or tongue. I mean, if you change your mind about getting your lip pierced then will it ever grow closed again? You'll be pulling the ol' sipping your drink through a coffee stirrer stuck through your lip trick for the rest of your life.