The Meat of Going Bovine: A Review Type Thing

I finally finished Going Bovine. If you haven't heard of it and didn't read my post on Friday (both offenses are of course punishable by wet noodle flogging), this Libba Bray's latest and greatest. Let me put it simply: You need to read this book.

There. If you don't like reviews, you're set. Aren't I nice? Don't you want to buy me ice cream?

Anyway, if you're wondering what it's about, let me give you The Quote That Sums It All Up:

"As a kid, I imagined lots of different scenarios for my life. I would be an astronaut. Maybe a cartoonist. A famous explorer or rock star. Never once did I see myself standing under the window of a house belonging to some druggie named Carbine, waiting for his yard gnome to steal his stash so I could get a cab back to a cheap motel where my friend, a neurotic, death-obsessed dwarf, was waiting for me so we could get on the road to an undefined place and a mysterious Dr. X, who would cure me of mad cow disease and stop a band of dark energy from destroying the universe."

That's a direct quote from the book, in case you couldn't figure that out. From page 257, which makes me laugh so hard. If you're not a statistician-ish person like me, you probably don't know the significance of the number 257, so this makes no sense to you.

Actually, there is no significance. But I had you going for a minute, didn't I?

I'm coming from a slightly unique place, review wise. See, I used to manage the national center for research in Creutzfeldt-Jakob disease, which is the disease that Cameron has in this book. (Actually, he has variant CJD, which is the technical name for mad cow in humans.) I know families who have lost people to various forms of CJD. I presented at an international meeting of experts on prion diseases, and I think I was pretty darned good even if they did keep calling me Carrie Fisher.

Maybe I shouldn't have worn my hair in those buns...

So given my background, I was simultaneously excited as all get out and nervous as all bleep for this book. Because really, a comedy about a dying teen seems kinda, well, counter-intuitive, doesn't it? And CJD is a horrible, devastating disease. I don't have enough adjectives to describe how horrific it really is. But Going Bovine manages to be simultaneously hilarious and heartbreaking. It doesn't shirk away from issues like regret, anger, and grief, but it doesn't disintegrate into maudlin Movie of the Week territory either. The wicked, delicious humor balances things out quite nicely, and actually I think it makes the poignant moments all the stronger.

Did I mention that the yard gnome thinks he's the Norse god Balder? And did I mention that for some reason, the name Balder makes me giggle? Because it does. Then again, we all know that I have the sense of humor of a 15 year old, so it's probably not much of a surprise.

Fair warning that this is not one of those brain candy type books. If you are one of those people that thinks of YA as a guaranteed fluff read, you are in for a shocker. This book is flat out epic, and heavy enough at times that I put it down and came back again later because I needed some mental processing time. There was just too much to digest, and I had a hard time keeping up. Having said that, it's well worth the return trip. The scientist in me also feels compelled to point out that there are some minor CJD-related inaccuracies, but they may have been intentional for all I know. This is FICTION, after all, and I don't necessarily expect the possibly hallucinatory, graffiti-winged angel to have the latest and greatest CJD info.

Yeah, I'm not that gullible. Close, but not quite.

Are you convinced of its status as a must-read? You can check out the Amazon listing, or take down the relevant info here: 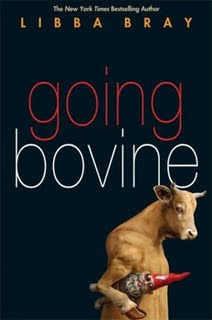 Can't wait to read this!

I LOVE Libba Bray. But when I saw a cow carrying a garden gnome on the cover I was like...hmm.
I also tend to stray away from "sad" books, so when I heard CJD was involved, I decided to pass. BUT after reading your review, I think I might give it a try.

This book is at the top of my TBR, completely reinforced by your review!

That actually sounds a little bit awesome. I thing I'm going to have to order me a copy.

Oh, and my word ver. if "reding," which is totally appropriate even if it's misspelled.

Anything that talks about Yard Gnomes is worth reading!

Wow, sounds awesome. Thanks for the review. The cover alone might have sold me, but your review definitely made it solid. :)

i never imagined Libba would be so diverse in her books!
I'm definitely intrigued !

I'm really excited to read this because I heard it's modeled after Don Quixote. Lit nerd!

I'm intrigued. How could I not be?

And my verification word is "prities". Also misspelled, but I'm going to surround myself with prities and baubles today.

I wasn't sure if I wanted to read this because it's so different from her other books, but you make it sound great. Another book for my TBR pile!

I so want this book. Must buy now. Thanks for the great review!

I like your review :D Here's mine if you don't mind: http://lorxiebookreviews.blogspot.com/2013/02/going-bovine-by-libba-bray.html

Thanks and have a nice day!