Kilts and Skulls and Other Awesome Things

How're you?!? Over the past week, I got a sneak peek at a new book cover for one of my upcoming releases, and I'm DYING to share it. Like, if I turn into a zombie and you have to shoot me in the head, you'll know who to blame. I also cheered for a big man in a kilt and Jack Skellington socks as he tried to throw a heavy weight over a pole. 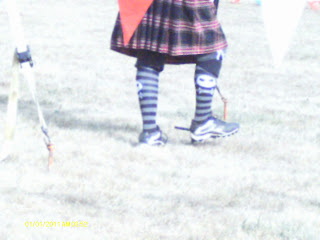 I covet these socks. They're good for throwing weights over poles.

And then we saw one of my favorite bands of all time, the Tartan Terrors. My new official photographer, otherwise known as my son, was kind enough to take a picture for me. I particularly like how we got photobombed by a skull. 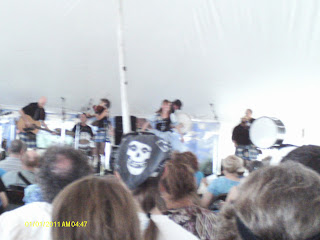 There's a bagpiper in there somewhere.


If you ever get a chance to see them, you totally should. They're insane in all the best ways. They play 80s songs on the bagpipes and get dressed up in sheep costumes, but not necessarily at the same time. (Although that does have potential...) Here's a taste of what it's like to see them live--the video starts out slow but gets awesome around 1:00 or so, so don't get discouraged.

Slayer and I are hoping to see them again when they come through Michigan in March. We may have to commemorate the occasion with a bacon party. ZOMG, GUYS. WE SHOULD INVITE THE TARTAN TERRORS TO OUR BACON PARTY. AND WE SHOULD ALL WEAR KILTS. THIS MUST HAPPEN.

Anyway, that was my week. How was yours?
Posted by Carrie Harris at 8:16 AM