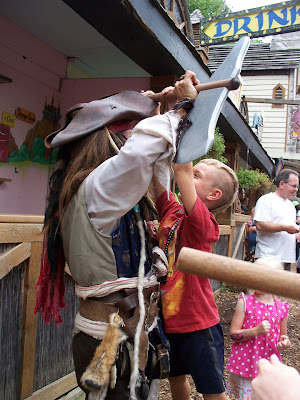 Oh, and my agent will probably be very pleased to know that I think I've settled on a plot for my fifth book, and it will be set at a Renn Faire. Of course, I have to finish book FOUR before I can get that far.
Posted by Carrie Harris at 9:52 AM

Omgosh I love ren faires heres my entry about my day at one this year (my second time that I remember and had fun at) http://creativefantasies.blogspot.com/2011/09/tardis-broke-down-in-renaissance-era.html and there are photos at the bottom and I got a dragon rawr

Oh right now I remember what I was going to say yay at book at a ren fair! sounds fun I still have to read your first book though (I should get on that sometime in october since my library is hinky with getting books on time lately so I have 4 out of the 6 books I'm request in transit) but yeah I'll get to your book soon

I love going to the PA Ren Faire. We try to go once a year.

I've never been to the Renn Fest before, and Colorado throws a great one. It makes me sad. I'll try to go next year :)

I totally want to attend a renn faire one day! I've wanted to for aaages but no one is ever around to go with me, and I'm too chicken to go alone lol.

Also, your son is bad@ss.

Kate: Rawr indeed. :) I read a mystery set at a Ren Faire a couple of years ago...I tried to look it up but I barely remember anything about it. Bad Carrie. No biscuit.

Nicole: I've never been to that one. The Holly, Michigan faire is really terrific. I think I should make it a goal to visit each one in the US at least once. Wouldn't that be AWESOME?

Daphne: Thank you for humoring me. ;)

Giles: It is totally worth it, if only for the giant turkey legs and the BEER.

Lori: Come to Michigan. I'll go with you. You think I'm kidding, but TOTALLY NOT.

I couldn't go to the faire this year, because of school deadlines, but they're fun. And it's great to know your next book will be set at one!

Love the. Tiffany achen series by pratchette! Brilliant costume choice if you can get the wee free men to Wally!

I just went to the renn faire this past weekend! There is always a Jack Sparrow now adays. I haven't read the tiffany achen by pratchett but I will have too. Currently my favorite book of his is Mort. Love the belly dancing snippet of info thanks for sharing!