I get a lot of requests for bacon parties. We threw one a year-ish ago--it was a Roast of David Hasselhoff/Bacon Party. Because nothing goes better together than pork products and Baywatch jokes. The thing I like the most about bacon parties is...well, the bacon. But the second thing I like is that it's relatively easy to put one together. Here are a few bits of advice that I'd like to pretend is sage: 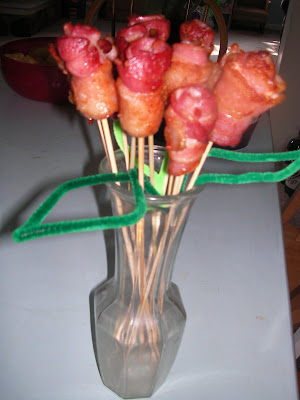 And now I'm hungry.
Posted by Carrie Harris at 8:55 AM

I am hungry, too! I just read a recipe for chocolate chip cookies with bacon chunks in them....I just don't know how I feel about that.

I henceforth move that all Valentine's Days should be celebrated by giving your loved one a dozen bacon roses.

Those are some delicious looking roses... *drools*

Maple bacon cupcakes are my husband's favorites. A place nearby makes praline bacon for brunch, and it is divine!

Throwing my hat in the ring here and telling you about the wonders of maple bacon ICE CREAM! Yes. You heard me. Ice cream. I've made it. And it's delicious. I'd almost be so bold to say that it's the best ice cream I've ever made.

I even did a post about it on my blog:
http://bethsfbtb.blogspot.com/2011/09/maple-bacon-ice-cream-more-than-just.html

I'll have to make you some when you come to my school since I promised you ice cream :p (hopefully my principal will give me an answer on this soon. I asked her the day after the Laini Taylor event).

I was in a store the other day and they sold a bumper sticker that just said: BACON. I laughed so hard.

[PG warning on this next one, if you're a nerd. Or have kids that are nerds. Fine, this clip says the word "penis," okay? Big deal.]
Turkey bacon can get the hell out of here, but Turk-y bacon is a different story entirely.

Cut bacon slices in half. Wrap each cocktail weenie in a half slice of bacon. Skewer with a toothpick. Place on sheet pan (best put foil on it first). When all meat is wrapped and stabbed, sprinkle with brown sugar and black pepper. Pat lightly with hands to get it to stick. Bake at 375 degrees for about 20 mins or until bacon is cooked. Let cool for five minutes and serve.