I don't know what it is about cupcakes that just screams monsters, but they seem to go together about as well as chocolate and peanut butter. (And I've just made myself hungry for Reece's at 8:30 in the morning, so I hope you appreciate the sacrifices I'm making for you.) Anyway, I think I've already mentioned that I got a copy of the cookbook, "A Zombie Ate My Cupcake" from one of my fabulous critique partners. 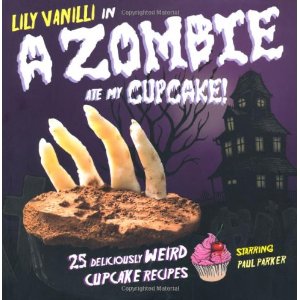 This Halloween, I'll be attempting the brain cupcakes, but I can tell you a little bit about my experience making the sugar skulls. I will admit that I cheated a little; instead of making the cupcakes themselves from scratch, I used a mix to save time. And I'm kind of glad that I did, because it took me over two hours to decorate about 16 cupcakes. Although admittedly, it was an uber fun couple of hours!

What you do is wrap the cupcakes in fondant to make them look like skulls, and I think an experienced fondanter (yeah, I totally made that word up) would be much quicker at this than I was. As a fondant newbie, I struggled a bit at first trying to get the right thickness, and I think the next time I make them it'll be a little quicker simply because I have a better idea of what works. So there may be a learning curve if you've never done that part before. But the decorating was SO FUN. I piped on flowers and pointy teeth and all kinds of crazy decorations. I mean, LOOK. 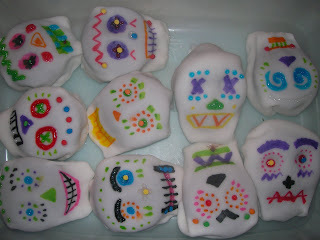 These skulls make me happy. Is that so wrong?

And I have the artistic skills of a gerbil. Imagine how cool these would look if done by someone who actually KNOWS how to draw.

The last thing I wanted to mention about these in particular is that it's a good idea to mention that people should take a nibble of the fondant, and if they don't like it, peel it off and eat the cupcake inside. I had a bunch of kids take a huge bite of the fondant and spit it out on the ground because I didn't give the disclaimer. Whoops.

Anyway, wish me luck on the brains! Of course I'll post pictures.

Don't forget to comment on all the Monster Bash posts to win a signed collection of Grable books!
Posted by Carrie Harris at 8:43 AM

The skulls are adorable! I am a sucker for Dia de los Muertos stuff.

Brains and cupcakes are things that naturally should go together more... You're braver than I am. No cupcakes or skulls here this year!

THOSE ARE AWESOME! (And I am SO buying that cookbook) Skulls + Cupcakes + Halloween = Happiness! :D

Those are AWESOME!!! Gerbil my butt, you did fan(g)tastic hehehe <3

Love the skulls and can't wait to see how the BRAINS... turn out. LOL!