I've got the perfect idea. Forget fortune cookies, astrology, and Magic 8 Balls. Okay, maybe not that last part, because sometimes when Slayer and I really can't decide where to go out to eat, we narrow it down to two and ask The Ball. Because The Ball knows things. The Ball is smart with a capital MA, simply because as we all know, I like random capitalization.

But I've decided that instead of reading Tarot or palms or anything boring like that, I'm going to tell fortunes by reading Halloween costumes. Because of course I am an expert in all things Halloweenie, as we've established already. And I think that Halloween costumes really say something about people.

For example, I give you this: 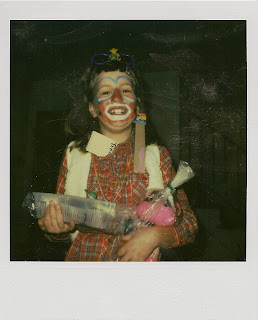 And no, I have no idea what the bleep my parents were trying to dress me up as. It looks to me like I'm a clownbo. Because I remember the plaid shirt and faux sheepskin vest. (I was stylin, wasn't I?) And I remember carrying a stick with a bandanna tied to the end, which strongly suggests hobo. But I look like my makeup was done by Sparky the Intoxicated Clown. And I've got a notebook as a tie. Don't ask. I have no clue whatsoever.

So I'm going to call it a clownbo. Now, if I was a Costume Reader, which I of course AM, I would say the following to Former Me: Get a life. Do it quickly. Because in about a year, some of your classmates will stuff you into a mailbox. And really, who can blame them, because the clownbo thing is just not working. Clownbos scream to be shoved into mailboxes.

I am beginning to think that my clownboness ruined my grade school career. I was the class geek in grade school. If only I would have dressed like Barbie, I could have been kewl.

Which is why this year I'm going as the Queen of the Ninja Cheerleaders. Because that kind of costume screams "I WILL KICK YOUR BOOTY IF YOU EVEN THINK ABOUT TRYING TO STUFF ME INTO A MAILBOX!" Because I've kind of got a mailbox complex now. Take a look at a mailbox next time you're walking by; you'll see why.
Posted by Carrie Harris at 7:10 AM

Love the pic. So cute and creative. :)

Oh, man--one picture of your formative years, and suddenly it all makes sense.

I like your this year's costume idea a lot better than clownbo, although I don't know--that picture is awful cute.

See, this just shows me that you were on the cutting edge of awesomeness at an early age. I mean...a clown AND a hobo? With a notebook and tie for those impromptu clownbo status meetings? Genius.

My parents have a similar picture of me as some sort of animal. I have horse ears, whiskers and I swear my costume has these weird dangly things that look like udders. (it was the 70's...my parents may have been slightly not really sober).

Ah, the good old days of being, well, being a goofy kid. i could easily revert back to that. (Now where did I put my tutu and bozo wig?)

and I think clownbo's are kewl with a capital E-L

One year my mom dressed my brother up as a mailbox. Love the picture!

I wish I had a picture of a little me wearing a Halloween costume. I just remember a black bin bag used as a witches dress and a homemade broom.

Thanks for reminding me to take plenty of pictures of my kids tomorrow. (heh heh heh)

I hate it when parents pick the Halloween costumes. My mother had awful taste : P

Keri: And humiliating. You forgot that part. :) Happy Halloween to you too!!!

KC: Doesn't it explain quite a lot?

Vivi: I dunno. You may have just passed me in the awesomeness contest with the udders.

Jamie: I don't think I ever got out of it in the first place.

Christy: Kewl with a capital EL. I'm totally using that line some day, in some capacity. That is, if you don't mind?

Adrienne: He's lucky someone didn't try to stuff me in the costume with him. Snarf.

Cate: I wore a trash bag one year too. I think I was a witch. I'm pretty sure I wasn't rubbish.

Aaron: Oh yes! Must not pass up the opportunity for future blackmail!!!

So will you be sporting your cheerleader costume at the bus stop with the super-preppy moms? Would love to see the reaction there...

Coming to your blog is always so much fun. How do you do it, Ms. Harris? Is it a drug? Cuz if it's a drug, I want some.

I'm SHOCKED no one mentioned your hand painted baby blue eyebrows!!! What an arch.

Glamis: I'm a little worried about the cheerleader costume. It's freaking cold. I'd be a cheerleader popsicle. So I may have to go for goddess, but the good news there is that I can be the goddess of anything I want. I may bring some tweezers and be the Eyebrow Goddess.

Kelly: You too, fellow Halloween fanatic!!!

BPV: It's not that great of a secret. Very little sleep, lots of caffeine.

KM: Aren't they great? I'm particularly pleased with the color. Everyone should have blue eyebrows.

OMGosh -- love the Clownbo costume! No wonder you turned into a writer! On my blog I have a slideshow and there's one pic of me dressed as a clown. I'm the one on the right with the red outfit, which I sewed (badly, I might add) myself.

CLOWNBOS OF THE WORLD UNITE!

You were so cute and OMG, what is that outfit? OMG, I think I had one just like it, or eerily similar.

That was the commentary going through my head when I looked at you picture (before reading your post).

When I was growing up, homemade costumes, with lots of creativity (a.k.a. confusion) going on, were all the rage, at least at my house.

Sorry about the mailbox. Although now I know why you are the chaos fairy. It's because you are small enough to fit into a mailbox.

FYI I did a comic sort of sketch-like-object, with Sheila AND the ninjas ... not sure where that will go.

How cute you were, as clownbo! grin...

I want to see you Queen Ninja cheerleading outfit...grin...