You may have heard this already, but over the weekend we had a bacon party. And oh my god. My house still smells of bacony goodness.

There were bacon wrapped hot dogs. Bacon dip. Bacon wrapped chestnuts. Chocolate covered bacon WITH SPRINKLES. (Bacon and sprinkles. Better than chocolate and peanut butter if you ask me.) I made bacon and maple syrup cupcakes that were out of this world, if I do say so myself.

We learned that I'm three degrees of separation from Kevin Bacon. Sadly enough, I'm only two degrees from Paris Hilton. That was really hard to deal with. In fact, the only thing that made me feel better was THIS: 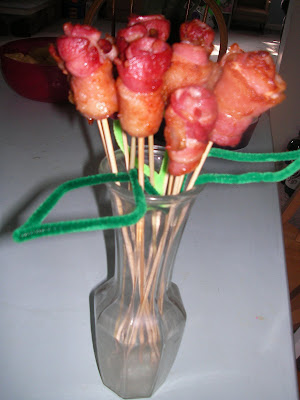 Yep. This is a bouquet made out of BACON. And it smelled delicious.

So you do realize that YOU are three degrees of separation from Paris Hilton, right? I suggest baking up a nice bacon bouquet. It'll make you feel better.
Posted by Carrie Harris at 7:59 AM

OMG the hubs would LOVE a bacon party!!!

Bacon Makes It Better is the truest blog post title ever! I could just be saying that because I heart bacon. Please post the maple syrup/bacon cupcake recipe. :)

I'm having a hard time imagining chocolate covered bacon. I'm so confused as to what that would taste like! But I'm all for themed parties.

PS - would you stop by my blog today and see if you like my new layout... it's not as super fun as yours but I'm interested if you still think it's pretty :)

Your blog in the morning is better than any kind of caffeinated beverage.

A bacon party... frickin awesome! And the imaginative bacon bouquet *almost* makes up for the fact that you put me three degrees from Paris Hilton. Almost.

This bacon party really made me wish I lived closer to you.

Bacon has the power to make every party better. Period.

Sounds like your party was a bacon fiesta of crispy/salty/goodness.

That's epic. Seriously, it like heaven on a stick.

If you are ever in need of a quick bacon fix, take a look at the warning label on your hair dryer.

LOL! I need a bacon bouquet. Seriously, that would be the perfect present for a certain brother-in-law of mine.

I'm also having a hard time picturing chocolate covered bacon. Lol! That is awesome! My sister cooks shrimp, wraps it in bacon, smothers in bbq sauce, and bakes. It's amazing.

I have to make bacon roses now. That's great! =D

Chocolate and bacon together sounds strange, but try it if you can; it is absolutely incredible. The saltiness makes the flavor of the chocolate pop on your tongue, then you get the rich smokiness of the bacon.

If you have a World Market nearby look for Vosges Haut Chocolat, Mo's Bacon Bar. They're so expensive for a chocolate bar (big mark up like everyone else riding out the "bacon fad") but they're truly amazing.