Yeah, don't jump to conclusions, peepul. I'm not going to announce the arrival of a new lil ninja in our family or anything. Because I know that's what you were thinking.

The other night, Slayer and I were heckling American Idol, and Slayer made a comment that made me snarf Dr. Pepper out my nose. He said, "She looks like the love child of Ronald McDonald and Jessica Rabbit."

See? It's comments like that that make American Idol freaking amusing.

And then I started thinking. What would Ronald and Jessica's baby really look like? It turns out that he'd look remarkably normal. A little twitchy, maybe, but wouldn't you be if your dad looked like that and your mom like that? 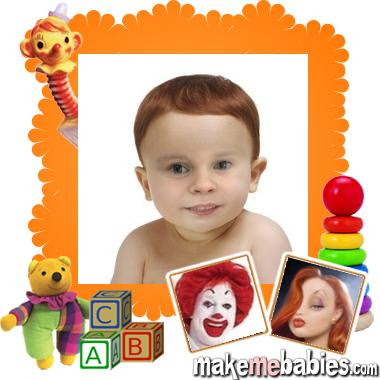 So then I thought, "Oh, this is one of those sites where you can't make a baby that looks like a mutated Winston Churchill." And to prove it, I put in two new photos: mine and Richard Simmons. And that's when I was proven wrong once again... 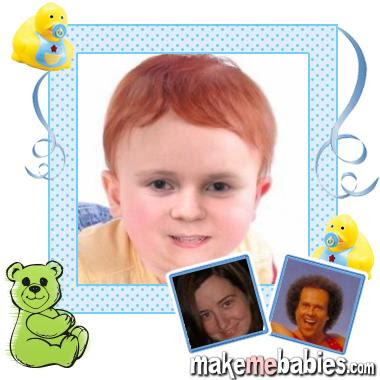 I'll just have to add another item to my Reasons Why I Didn't Marry Richard Simmons list.

Don't forget about the contest! It ends today at noon, and I've been working on one hecka cool prize pack!
Posted by Carrie Harris at 8:55 AM

Can you bring me a new set of pants at work? That headline gave me one helluva startle!

A couple of years ago (on our version of American Idol) we had a dude that looked like Sideshow Bob.

I know exactly which contestant you're talking about...my husband thinks she should only be allowed to sing, not talk...you find the most hilarious stuff!!

That is funny! (and so is Slayer's comment!)
My hubby and I did something like that in a photo booth in Vegas. They supposedly took your features then gave you a picture of what your future kid would look like. Then after we got our pic we saw that "our kid" was in the photo booth advertisement in another casino! I yelled real loud, "THAT's OUR KID!" We were bamboozled!

*Slayer of Bees stares at the family portrait, finally realizing the twins look remarkably like the love child of Carrie and Richard Simmons*

I have never seen one of those pictures that look even remotely like a child I would be willing to give birth to. Maybe it's a conspiracy to keep the birth rate down?

*shudders* Babies give me the willies!

I wonder if I put in me and my hubby if the babies would actually look like the one we've got... must go check, hehe.

Oh my gosh, where do you find this stuff! LOL

Who doesn't want to know what their baby would look like if Richard Simmons was the father?

That's the most frightening thing I've ever seen. I'm SOOOOO going to that site and entering weird pics of me and H. Even though we're girls and could never make a baby that looks like both of us. Unless we did it online... ; )

marry? i thought he was your GA? did you know his hair is not naurally curly? wTF?

This is totally halarious!