Alright! The peeps have spoken, so we're going to do another thinking type contest, only I'm not going to ask you to think too hard because I will feel guilty if you break something. Anyway, this contest is called the Zom-Com Contest, which you have probably figured out if you actually read the titles to my posts. And if you don't, PBBT! on you.

Anyway. The purpose of my contests is pretty simple: make me laugh the hardest and you'll win. It ain't rocket science, people. And your task is to make me laugh with a zombie-related object of your own creation. Note this last bit, folks: linking to someone else's awesomely hilarious zombie story will not win you this title. You must make it up yourself.

So what qualifies? Anything, really. Make a lolzombie. Write a zombie haiku or a limerick. Tell a zombie joke. Make up titles of books about me and zombies, or you and zombies, or you and me and zombies. Write a song about zombies. Photoshop a picture of Zombie Richard Simmons. You get the idea, right? Anything goes, so long as its yours, so long as it's undead, and so long as it's snarfy. Post it in the comments section if you can. If it's a graphic, you can put it on your own blog and put a link in the comments section, or you can email it to me direct at carr dot harr at yahoo dot com.

I'll give you a week for the contest, which means that entries will close June 17th at noon EST. I will announce the winner by the 19th. Enter as many times as you like. The more, the snarfier. But please keep your entries PG-13. I write for teenagers, remember?

The winner will receive one of the infamous Wonder That Is My Blog prize packs. Contents vary, but at minimum this one will contain a $25 gift card to the online book retailer of your choice and a copy of Carrie Ryan's Forest of Hands and Teeth, because zombie books written by people named Carrie are kewl. I linked to the old prize packs so you could get some idea of their contents yesterday, but I guess I'd better do it again just so you can bask in the awesomeness.

See what I mean?

Alright. Did I forget any essential bits of info? Ask me in the comments. Otherwise, bring on the zom and the com. I promise not to drink anything while I read your comments, because I expect you to be funny.

No pressure or anything.

UPDATE (6/11/09)
Last night, I realized that there is such a thing as leaving a contest TOO open-ended, so I decided to give you some prompts to help get y'all started and avoid any flaming brains. (Although the zombies might like that.) The contest is still open to whatever bit of Zom-Com you want to put together; you do not have to use the prompts. But I realize that not all of you have the time or inclination to obsess about funny zombie stuff like I do.

So... if you're running low on ideas and still want to enter the contest, how about making a lolzombie out of one of these? We've got an armless zombie, and a zombie ordering from McDonalds. There's a free lol creator here, because I'm all about enabling zombie nonsense. You could also caption one of the photos if you're not interested in fooling around with the lol creator thingy. 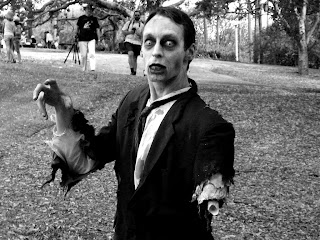 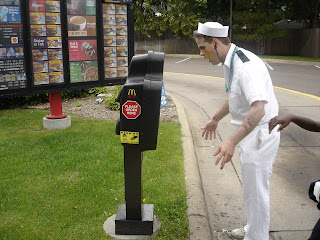 OR... write a haiku about Zom Cruise. (That would be a zombie Tom Cruise, if you're relatively new to the Wonder That Is My Blog and are unfamiliar with the fabulousness that is ZC.) OR... give me some titles and/or hooks for a book about me and zombies.

There! Does that help?
Posted by Carrie Harris at 6:15 AM

If you listen very closely you will hear the cogs in my head turning.

I smell wood burning, at least that's what I think it is...If my head burst into flames, I'll hold you responsible, Carrie!

Because I'm lazy and I procrastinate and everything, I probably won't get around to fleshing this idea out, so I'll just give you a hint as to what branch of zombiology I'll be working in: zombie droppings.

Just so people aren't confused if they look at my prize post--my husband is NOT included. Sorry.

(He's not, right, Carrie? Right?? I really don't want to have to find another one.)

Barry: Uh oh. I think one of your cogs just derailed. Or whatever cogs do when they stop turning...

Alan: I'll make sure to keep a fire extinguisher handy. If you believe in spontaneous combustion, you might also believe that I can extinguish you via the internet.

BPV: You WOULD go there, wouldn't you?

Kiersten: No, dahlink. I promise not to give away your husband. Snarfle.

I think I need to watch Shaun of the Dead (any excuse) for inspiration.

Love this contest..:) I wish I thought in zombies..

why cant it be the dumbest comment - then i would win - but funny. oi!

Zombies watch "Thriller",
moonwalking in the graveyard -
Next is "Billie Jean"

My entry is here:

Another entry (and yes, I should have probably stopped while I was ahead).

A Zombie cover of an Amercian Classic...John Mellencamp's "Jack and Diane"

Little ditty about Zack and DeadAnne
2 undead kids rotting out in the heartland
Zacky died in a fire, check out his burns and scars
DeadAnne got stuck in the grill of an Asian man’s car.

Suckin' on a cerebellum outside the tastee freeze
DeadAnne sittin' on Zacky's lap
sucking the gristle from his knees.
Zacky say "Hey DeadAnne lets run off
Behind a shady tree,
Dribble off that layer of epidermis
Let me eat what I please.”

Zacky sits back, picks at his boils for a moment
Scratches his head and burps up a bit of James Dean.
“Well you know DeadAnne, we oughtta run of the city.”
DeadAnne says "Baby, the zombie apocalypse is finally upon us and now that we are immotraly undead, all you can think about it running off to the city. We’ve got plenty to eat here outside this taste freeze so let’s just stay here and pass me James Dean’s spleen, please."

Zacky say
Gonna take a rock
Gonna take a bowl
Put a human’s head between the two
and bash out his soul.
Braaaaaain Stew like this don’t come in a can
Matter of fact there are no grocery stores
for dead women and men

Little ditty about Zack and DeadAnne
Two undead kids chowing down on their fellow man.

Okay, I finally came up with the perfect thing! Now I just have to create it, mwahaha!

I'm laughing so hard at Barry's Zack and DeadAnne that I think I'm going to choke!

Okay, meet Tater of the Dead.

I like big brains and I cannot lie
You other zombies can't deny
That when a girl walks in with an itty bitty waist
And a tasty lookin’ face
You get grooan
Wanna pull up front
Cuz you notice that brain was stuffed
Deep in the hat she's wearing
I'm hooked and I can't stop staring
Oh, baby I wanna get with ya
And eat your fingahs
My zombies tried to warn me
But with that brain you got
Me so hungry
Ooh, eat all of that smooth skin
You say you wanna get in my mouth
Well feed me, feed me cuz you ain't that average entree
I've seen them thinkin'
The hell with the shrinkin'
She a big pig, gonna get me a bloody swig
I'm tired of magazines
saying small brains the only thing
Take the average dead man and ask him Hey
She gotta pack much grey, so

IF YOU GIVE A ZOMBIE AN EYEBALL

In my defense, I just found out about the contest this afternoon. That was more fun than anything I should be doing. :)