It's Raining Good Karma, Not Men

The positive karma is already rolling in. After I announced yesterday's contest, I got a free computer. I still haven't named her, but I did put this on my desktop. 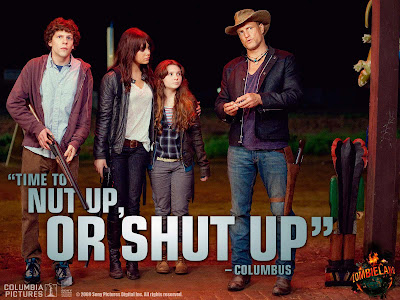 So now, every time I boot up, I get an insane case of the giggles.

And then, this morning, I discovered that No Pain, No Brain was featured as a title to wait for on Khyrinthia's blog, Frenetic Reader. I cannot decide which I love more, the fact that she featured my book or the zombie lolcat she posted with it. Probably the first, but the lolcat is definitely a close second.

And... my contract stuff is all done! I'm waiting to get into edits and all kinds of fun. I'm also going to make about 600 copies and wallpaper the office with them. No Pain is officially a step closer to being on the shelves! Woot!

That's totally awesomesauce. So awesomesauce, in fact, that I'm going to up the critique from five pages to ten. And it's still free! Hee hee!

So if there's anything you need feedback on, please enter the contest! I'm serious about wanting to pay it forward, particularly if you're writing about wereguppies. Because really, the world needs more stories about wereguppies.
Posted by Carrie Harris at 8:52 AM

Free computer WTF! How do I get me one of those? I had to pay for my pretty little green friend. (But it's green, so it's totally worth it!!!)

Congrats on all the good Karma. Can you send some my way. I feel like it's a bit lacking in my corner of the world these days.

But ohs wells...It will come back eventually. This is my year of thinking positive...about EVERYTHING! What?!? Somebody ate my chocolate? I shouldn't be eating anyway. NO WAY...my kids didn't clean their room again? Oh well...it will just be dirty again tomorrow. See how this works!

My computer froze up in envy when he saw you were working on a new machine. Either that or it was just another Windows Vista glitch.

Zombie lolcat. Good God. And here I thought I'd seen everything!

Off I go to change my post to reflect your recent bout of insane generosity. ;)

The contract is signed and finished? SWEET!

Ah, the computer is a girl! Must brainstorm zombie-riffic names.

Zombie-riffic is totally a word.

Congrats on finishing up all your contract stuff! How exciting!

And what is this I keep hearing about free computers? Congrats on that too!

A free computer!! Go you!

Fantastic! I'm so glad The Universe is being nice to my friends! He was being such a punk before. Sheesh.

Your computer screen saver is hysterical. I can always use a good critique, so I'll have to go check out your contest and see if it's something I think I have even a shot at.

Good Karma skipped my house. I bought an ipod off this kid I know from my car enthusiast forums. He said he'd found it on the street. He's a good kid, I believe him. Well, turns out there is a web addy engraved on the back. I look it up, find the original owner--briefly wonder why the kid never bothered to do this--and I drop him an email. He meets up in Brooklyn, picks up the ipod with barely a thank you and skips off. I'm out about 100$, but hey, it wasn't really mine to keep.

A month later, MY ipod is stolen out of my car...