Welcome to October! October is my FAVORITE MONTH EVER. Halloween is my FAVORITE HOLIDAY EVER. Caps lock is my FAVORITE KEY EVER. Anyway. In honor of October, I've decided to explore a topic of IMMENSE IMPORTANCE. Snarfy monsters. I talk about snarfy monsters a lot on this blog, and I think it's about time that we delve deep into this topic. I'm talking scientific method, peeps.

So, without further ado, I bring you the Funniest Creature Championships. Over the next month, YOU are going to choose the snarfiest creature out there from a list of eight highly qualified finalists. I even have a highly scientific Excel spreadsheet.

Bow down before my mad Excel skilz!

Here's how it works. I'll give you two creatures and a brief rundown on why I find them hilarious. You vote in the comments. The one that gets the most votes moves on to the next bracket. Awe-inspiring science, isn't it?

First, we've got the vampire bracket. I think you all know what's coming.

CREATURE 1: The Cullens
Funny for one very simple reason--their powers are super strength, super speed, and pretty sparkles. They inspire cartoons like THIS. 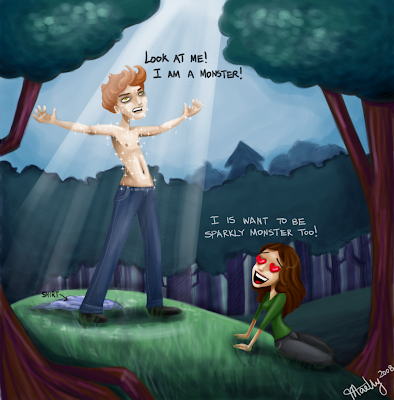 In short, any creature that makes me want to prance around the room going "Sparkle sparkle sparkle!!!" and doing jazz hands is FUNNY. And the Cullens make me want to do that.


CREATURE 2: The Roller Skating Vampire
Imagine this: you've just learned that bloodsuckers are invading your town. You are an idiot and decide to walk around at night anyway, just for kicks. And then...gasp! You see a vampire in a darkened alley! It roller skates right toward you with its claws outstretched, and it's a cross dresser, and-- 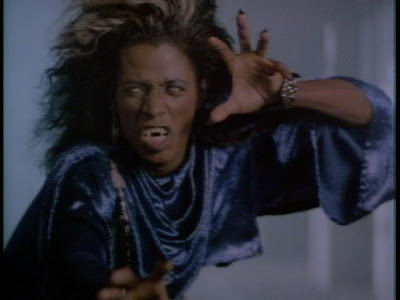 If this was chasing me, I might die. But it would be from laughter.

The movie is Fright Night 2, which is one of the best films EVER. And when I say that, I really mean that it's so horrible that it's magnificent.

So. Which do you find funnier? The Cullens or the rollerskating vampire? I HAZ 2 KNO. And make sure to tune in again tomorrow to see the mutant pictures I've found of my favorite celebrities. Too freaking funny.
Posted by Carrie Harris at 8:01 AM

Cullens all the way.

I don't think I've ever seen Fright Night 2. So I'm going with the Cullens.

I'm for the Cullens... but I think it's the picture that has me with that option. I mean his sparkles just draw me to him... not to mention her heart shaped eyes and the picture of his shirt (with a label) has me falling over laughing!!!

This is hard!!! Have to say roller-skating vampire...because it's funny and I actually feel a little sorry for the Cullens.

the cartoon sold me. i'm voting for the cullens.

Both literally made me LOL, so it's a tough choice. I think I'll vote for sparkly jazz hands (Cullens).

hi miss carrie! wow this is really hard to choose cause both of them got me laughing soooo hard. so i had to say which one got me laughing the most and it was that sparkly vampire. i got laughing at those heart eyes so much. if i got to be a vampire i want to be a sparkly one. besides i cant roller skate so good.
...laughs and hugs from lenny

Roller skatin' vamps that cross dress?!? I'm all over that one.

Roller Skating Vampire ALL THE WAY!

Drag on Skates for me LOL!

Wow. I'm going to have to go with the sparkly side (Cullens) even though cross dressing roller vampires are pretty funny too.

Haha. Now I need to go watch Fright Night 2. But my vote is with the Cullens. :)

For sure the Cullens... Such a silly thing, vampires...

I am very inspired by your blog and give valuable knowledge so it is very useful to others and you can check our blog . You should try our website because it is useful who are looking for printer services and all in one printer is beneficial to all others. hp deskjet 3755 printer provides the best printing services to its users.