Am I the only person around here who bores the heck out of my significant other by telling the SAME stories over and over again? I was making waffles the other morning, and I was standing in the kitchen thinking about how there was a waffle press in my college cafeteria, and we used to make fresh waffles, drown them in about a half gallon of syrup, and then put vanilla soft serve on top.

I need to pause for a moment to tell you that I am literally salivating.

So I've decided that a little revisionist history is in order. My stories are old and tired, and I need the new hotness. So from now on, every time I tell these old standards, I'm going to replace things.

Well, yeah, since he reads the Wonder That Is My Blog. Whoopsie.

But anyway, the next time I tell it, it'll be different. I'll tell about how there was a waffle press in our college cafeteria, and I used to make waffle fish, and cover them with about a half gallon of sparkles, and then put soft serve on top. It'll be kind of an homage to merpires. 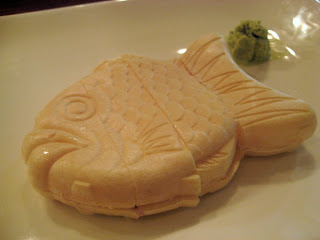 We love you, Ward. Hope you don't mind if we smother your likeness in ice cream.

Hmmm... I've got an old standard about this one double date that I went on where my friend's date vomited veal parmigiana all over her, and we made up a song about it. ('I feel like puking veal,' sung to the tune of 'I feel like making love.' My days as a song parody writer have been long and semi-distinguished.) I wonder what I could do with THAT story.

A lot of very inappropriate things come to mind...

OBLIGATORY CONTEST SHOUT-OUT: Did you know that I'm running yet another contest? You can win a signed Wolverine book and a Wonder That Is My Blog prize pack. I just received the Dismember Me Plush Zombies in the mail. Heh...
Posted by Carrie Harris at 6:38 AM

They didn't have a waffle maker in my cafeteria. I feel ripped off. Do you think it is too late to ask for my money back?

I can't think of waffles without going back to freshmen year, living in the dorms and eating at the cafeteria. On the weekends they pulled out the super big, fancy waffle makers. I would wake up so excited on Saturdays to get my waffles. We didn't have ice cream, but lots of syrup, powdered sugar and chocolate chips. Best part of living campus!

Hmmm, waffles. We were lucky we had a salad bar. No ice cream either. We did get together in the dorm kitchen and make Indian food though. I never tried to put ice cream on the curry though.

I, too have a semi-distinguished past as a song parody writer.....one of my favorites being an homage to Star Trek sung to "Wake Me Up Before You Go-G0" (except it was "Beam Me Up.....") naturally.

Yes, I am that cool.

Mmmm... Waaaffles. There is a chance that Slayer will notice when you add the sparkles. Just maybe. :D

My husband tells the same stories over and over. I should send him here for lessons in sprucing things up...

Yes, but if you change the historical story, then you change history.

I say to spruce your stories up just say them louder and with emphesis on different words each time you say them. That will effectively catch your listeners off guard and cause them to have a fresh listening experience.

And it would be funny.

I'd forgotten about the college cafeteria waffle makers! Man, those were good waffles. And we weren't the ones who had to clean them, which was even better even if by the end of breakfast time they were all drippy with spilled batter and crusted with burnt bits.

When you marry a person, you agree to listen to the same stories over and over. Its in the paperwork.

It's sad to admit but I've never had waffles and so, I'll never have a waffle story. :(

The idea of fish waffles kinda makes me wanna gag a little. :)

I know I've told my hubby the same stories over and over. Once in a while he gets a new story of my childhood. But it's rare.
I want one of your college waffles. YUM!

My hubby has a terrible memory, so I get the same five stories from him weekly. On the other hand, I can tell mine over and over and he thinks they're hilarious and new.

a fish waffle... oh the wonderment.

Jamie: Either that, or donate a waffle maker to the school and let them figure out what to do with it.

MeganRebekah: See, we had ours during weeknight dinners. They were those huge waffle makers that can't be moved. Heh.

Ami: Well, we didn't have a dorm kitchen, only a microwave. So I guess that makes us kind of even?

Storyqueen: I would pay money to hear someone sing that song. ;)

Tiny T: What? Like he's some observant ninja or something? Oh. Wait. He is.

Adrienne: The secret to good conversation, obviously, is in the sparkles. Heh.

KM: Snarf. I can just hear it now. "And we used to EAT waffles with syrup and SOFT serve ice creeeeeeam. It WAS so GOOD."

KC: Our waffle makers never got all yucky, because they were the fancy kind. But the floor underneath? It was a gymnastic exercise to reach the waffle maker without touching the floor.

Natalie: What, in invisible ink?

Cate: Never had waffles? Is that a Brit thing or a Cate thing?

Jamie: Well, at least I got SOME reaction out of you, right? ;)

Horror Girl: I couldn't believe I found a picture, actually.