Look, Jane, look! It's something that makes me snarf!

I think this video has a very important message: it's time to step beyond the magic rings and give the other magic thingies their due. Imagine being a pair of magic galoshes, just waiting for someone to recognize your awesomeness. But nooooo. Those #$*)ing cutesy little rings get all the attention.

Magic galoshes are pretty much the nerds in the world o' kewl magic objects. And since I am a nerd, I identify with them pretty strongly. Y'know, in case you couldn't tell.

My WIP has a holy object in it, which is pretty much a stone's throw from a magic object in terms of literary devices. And I think that in the interest of kewl magic objects everywhere, I need to step outside the usual magic object box. I shall not use a ring, or a gem, or something pretty like that. I will not kowtow to convention and break out the holy hand grenade.

Nay! I shall do something different. 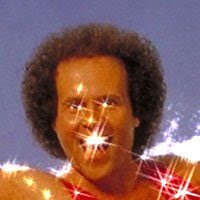 I blame this whole idea on Super Brave Mercedes. She sent me the most hilarious thank you gift ever: a handmade purple ninja with his own Richard Simmons doll. I nearly gave myself a coronary, and now I've got Richard on the brain. So thank you to Super Brave Mercedes for the ninja, and to Humongously Awesome Hollan for the ninja pictures. My office is nice and ninja-y now. Y'all deserve to go into the Semi-Secret Order of the Blog Ninja just for sheer awesomeness. I also belatedly realize that I never added Kiersten to the SSO, and as the office assistant to The Universe, she deserves it.
Posted by Carrie Harris at 6:54 AM

Awesome video. Fitting too, as I still believe the movies were overindulgent nonsense.

I'm quite interested to know what you would make a holy object. Hehe.

The video is priceless! Love. It.

Best day of my life. I'd like to thank The Universe, for employing me to write all of its emails.

I'd also like to thank my family, for allowing me this ridiculous internet addiction so that I could be friends with Carrie.

I'd also like to thank some seriously sweeeeeet B-NAG, for making the world a better place.

Ha. You should watch the how it should've ended video.

Yay! What purple ninja wouldn't be complete without his own Richard Simmons doll, I ask you? Thanks for the ninja-y honor!

As for reading P&P&Z, I unconsciously did a terrible English accent every time that Elizabeth spoke, and I made her mother sound rather like a fish wife. Or a man-playing-a-woman from Monty Python. I think you'd pay money NOT to hear me read it!

Ha! I loved the 60-second version, except it didn't have enough Legolas.

The sparkly Richard Simmons frightened me, though.

My WIP is all about powerful objects taken from the dream world. Do you think I should change it? Tell me what to do, Carrie.

Barry: I wasn't so crazy about the commercial at the end, but I decided that the awesomeness outweighed the boring commercialness.

Natalie: I think we should make brownies shaped like shuriken.

PJ: Isn't it? They did a great job with the editing too.

Kiersten: I think there should be free B-NAG for all members of the SSO.

Sherrie: Why, thanks! (I'm not sure why I said that, since I didn't make the video or even come up with the idea. Maybe I'm thanking you for thinking I've got good taste. Sure. That's it.)

Mercedes: Um, think about my sense of humor. That description only makes me want it MORE!

Natalie: I expect a short story about that soon.

KC: At least the video didn't have Holy Richard Simmons in it.

KM: You think? But he's not scary without the sparkles, is he? Are his sparkles SCARY?

BPV: Well, I think so long as you add a little variety in the objects, you'll be okay. Like maybe there could be a Magic Dream Ruler. You could measure things with it. Magically. In dreams. It's the kind of original idea that no one will ever steal.

[Steph tosses the keys to the evilmobile to the Ringwraith. World ends.]