A Confession, and Some Awesomeness

First off, I have a confession to make. This weekend, I killed Faramir, Elmer Fudd, Billy Crystal, and Josh Hartnett. It was game night on Friday. We have this board game called Marry, Date, Dump. We've talked about the game before; I think I told you that we play a more grown up version, which is marry, spendqualityalonetime, kill. And I had to choose between Aragorn, Legolas and Faramir.

Of course I married Aragorn. I wouldn't want to marry someone with prettier hair than me.

That was only slightly less traumatizing than the round during which I had to choose between Elmer Fudd, the Keebler Elf, and the Mayor of Munchkinland. This became even more traumatizing when my friend The Electric Lovitz started doing famous movie roles as played by the Mayor of Munchkinland. Then he switched to Forrest Gump as the bad guy from Silence of the Lambs.

"It puts the lotion on its skin, Jen-nay."

And we wonder why I turned out the way I did. Seriously, if I can ever figure out that whole YouTube video posting thing, I'm going to talk him into doing that for the cameras. Because it's freaking hilarious.

In the category of Awesomeness, I have something to show you. You may recall that I was incredibly excited for Kiersten's amazing three book deal. I walked around for weeks telling people about it and claiming that I was going to ride her coattails to fame. (She has since notified me that she does not wear coats and maybe I should consider riding her flip flops instead.) Anyway, my ranting has inspired art.

I feel so freaking kewl.

Here it is, courtesy of aMadArtist: 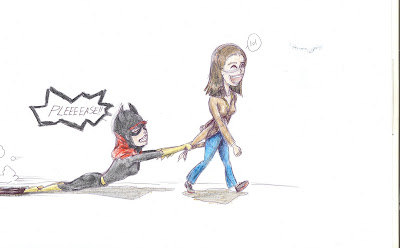 I so want to put this on my wall.
Posted by Carrie Harris at 6:05 AM

Hi :)
Sounds like a great game with a lot of laughter and fun.
I loved the picture!
All the best,
RKCharron
xoxo

Love this! So great.

Thou art truly blessed to have such talented friends.

(Did you I could do yo-yo tricks?)

Still laughing about Forrest in S.O.T.L.

Oh, who hasn't killed Billy Crystal at some point?

I love the cartoon. Do you always wear a Batgirl costume, or only when posing for art? :)

wait you're batgirl right? crap. if you're not i'm going to feel stupid.

On the bright side, having my coattails pulled that tight make my figure look AWESOME.

On the brighter side, you didn't need my coattails at all, did you?

Hehe, that's a great comic! But I still can't believe you killed Faramir. He was so, so nice!

I so want to play that game. Except I would marry Legolas. I have a thing for pretty boys. And the comic is hilarious.

What a great board game! And that art? Priceless.

That picture is absolutely priceless.

The drawing is classic. Love it! But the Forest Gump thing? Even more classic.

RKCharron: And I got it on the discount table. Which goes to show that even awesomeness can be discounted.

Cate: Isn't it? I gnash my teeth in envy.

BPV: You can do yo-yo tricks? Awesome! I did an Around the World. Once.

Jamie: Somehow, I knew that YOU would appreciate that.

KC: Only on Fridays. And Thursdays. And some other days that end in Y.

HG: Of course I'm Batgirl! Although I have to admit that my butt is not that cute.

Kiersten: Isn't that hilarious? The funniest thing is that I didn't tell her what you look like, but the drawing is kinda cute and tiny like you.

Natalie: Well, I couldn't kill ARAGORN. I mean, really. The world would implode from lack of scruff.

Fun car games for the win.

Elana: Really, it doesn't get much better than this. :)

Novice Writer: I'm sorry. I am a bad, Faramir-killing person. ;)

Mariah: Whew. I'm glad someone else is as mean as mean. You want to join the Faramir-killer club? We've got a secret handshake.

Nicole: You're not kidding. I was literally crying, I laughed so hard at the Forrest impression.

I would have picked Aragorn too. Legolas is just too pretty. And your picture was hilarious.

It's okay, Carrie. I'll forgive you for the lack of scruff comment.

Thanks for the laughs today!

*snicker* This is just awesome! Not only do you play fun games, you have the most wonderful wardrobe too! (Not to mention you look very good in a cape.);D

LOL, this part cracked me up!! "Then he switched to Forrest Gump as the bad guy from Silence of the Lambs" Thanks for putting a smile on my face!

I really want to play this game!

Love the spendqualitytime with, kill. Hilarious post. The illustration is pure awesomeness!

Haha- I love that game. My friends and I have played it before. And random aside: I choreographed a production of The Wizard of Oz at the theatre where I work, and one of the attendees was actually Mr. Karl Slover, who is one of the only living munchkins from the original Wizard of Oz movie. It was very cool to meet him- he lives in a nursing home nearby. Lol- sorry for the kind of off topic- but I read "munchkin mayor" and thought of it!

ha ha! what an awesome picture!

Natalie S: I know! I have to say that I look GOOD in a Batgirl costume.

Natalie: Yay! I love it when people agree with me!

Novice Writer: I feel like I should do some mea culpas or something. ;)

Danyelle: Hey, you're invited over for game night any time. Of course, you'll have to wear a cape too, but that's okay.

Nadine: Isn't it priceless? And for a minute, it didn't register what he was doing. I'm sure the look of confusion on my face was pretty good too.

Storyqueen: Okay. You're invited over for game night too. :)

Sherrie: Isn't it? I so wish that I could draw.

Kelly: Why, thanks! I'm just lucky to have such talented friends.

Colby: That IS cool. And the fact that you're a theater person is uber cool. I've got backstage work in my blood; it takes a lot of effort for me to dress in anything but black, and I like to skulk around in the darkness. Of course, I could also be a vampire...

Rebecca: Thanks! AMadArtist is really talented, isn't she?

No need for mea culpas. I love the hilarity that is your blog.