Calling All Book Ninjas - A Bit on Pirating

I knew I'd "made it" when Google Alerts for pirated versions of my book started showing up in my inbox. I was able to take the first few with a decent amount of humor, because it's pretty ridiculous to believe that it's not going to happen, right? I knew it. I was prepared-ish for it. And then I saw the number of people downloading it and totally went batshit crazy.

I don't normally swear on this blog, but that's how crazy I went.

Because the reality is that if every one of those people had bought a copy, or even gone on their library website and requested the book instead of doing the exact same thing on an illegal sharing site? If they'd done that, IT WOULD HAVE MADE A BIG DIFFERENCE TO ME. And not just in terms of my ability to stay relatively sane, but also in terms of my career. I'd explain this, but the lovely and hilarious Saundra Mitchell already has, and she's smarter than me. Seriously, it's worth a read, and I'll be here when you get back.

Book pirating is a real problem. And I've been thinking a lot about this whole issue and what to do about it. Beyond the obvious, which is SICCING RANDOM HOUSE on them and composing emails to them in my head that start with "AAAAAAAAAWHYDIDYOUDOTHAT?!?!" I've been doing both of those things, and they have an immediate effect, I guess, in that they make me feel marginally better and RH is now on their trail to hopefully make them take it down. But somehow that feels insufficient. I needed something bigger to get the attention of those pirates.

Everyone knows that pirates and ninjas don't get along. When ninjas are involved, I think it's a given that pirates pay attention. And I think that many book pirates honestly don't understand that their actions are seriously contributing to the fact that their favorite series doesn't have an ending...because the publishing house chose not to pick up the next book due to low sales. I think they're so busy stomping around with their peglegs and illegal downloads that they don't REALIZE that they're not just sticking it to the man, but they're also sticking it to authors...who can't afford to be authors any more.

Now, I'm not in that situation at this point. I'm very lucky to have two more books coming out in the next two years, and I'm working my butt off to insure that they're followed by more of the same! But that doesn't change the fact that it PISSETH ME OFF AND MAKETH ME SPEAK IN A PSEUDO ACCENT.

I know that to a certain extent, I'm preaching to the chorus. I know a lot of you, and you wouldn't dream of pirating a book. Most of the people who need to hear this aren't on book blogs, so we're all stuck dealing with it, right?

Maybe so, but there's still an opportunity to make a difference. Be a book ninja. Nodding in agreement when reading blog posts like this is GREAT, and I'm glad if you're doing that. (Heck, I'm just happy that you're spending a few minutes with me in the first place.) But there are plenty of easy things you can do to help make sure your favorite authors can still write. Help spread the word about library programs that allow you to download FREE BUT LEGAL ebooks for people who are desperate to read but just can't scrape up the cash. If you're in school, write about these things for a report or the school newspaper. If you know someone who has downloaded books, take a minute to point them towards Saundra's post so they understand that it really DOES make a difference. Speak out against book piracy. You can even wear a ninja cowl when you do it if it makes you feel cooler. It does for me.

Be a book ninja. 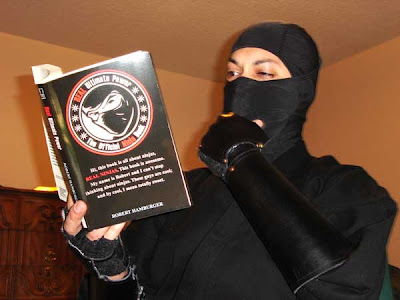 Here is a book ninja learning how to kick some book pirate booty.
Posted by Carrie Harris at 7:50 AM

It's insane. It really is. How is it that people have never heard of a library and the fact they let you read all the books you want for free?

I think if you sicced the ninja zombies on them, they'd simply crumble!

Sorry this happened to you.

Rawr dumb people!
I'm waiting a few months till the library has it and it's no longer new (sorry I'd read it sooner but the libraries don't let you request it right away) and thats how I've always done it unless I KNOW I'll love it in which case I buy it

I hate when people pirate anime, manga, or books um hello if you wanted it free go to the library its this cool place where you can get books for free and legally and you can get more then one book

So sorry to hear this has happened, Carrie.

The libraries around here suck. Honestly, they just have up to middle reader books, some trashy romances, and reference books. But I never would have even thought of pirating a book.

I've retweeted and will definitely be blogging about this issue on the writing and the WAHM blogs.

I'm also sorry this happened to you. Yes, the library is a great place as is the bookstore, which lets you purchase lovely books, some of which are signed by the authors.

The great thing about the library is they'll order books if enough patrons ask for them.

Apparently I'm really in the dark because I haven't even heard of this. All this time I've been worried about digital novels killing paper novels but maybe there is a bigger culprit. I'm sorry it caused you such anxiety and frustration. I can definitely understand why. If it makes you feel any better, I have my shiny new copy of BTiB sitting right next to me right now!

In all seriousness, though, that's pretty balls.

The thing about book piracy is, if it's a problem for authors, it's a problem for those of us who love to read. If all the authors I love have to stop writing and find another job because they can make a living putting pen to paper, then I am truly going to be out of luck. Why can't the WSJ do a big blowout article on this instead of trying to dictate what does and does not constitute appropriate YA fiction?

Okay, that totally sucks! I had no idea book pirating was so prevalent. Silly me. I actually pay for most of my books and borrow the rest. I'm glad you're kicking some pirate butt. It helps having ninjas for friends :)

Ray: I KNOW. All I can think of is that maybe they think there's no difference between the two? I'm sure some know but don't care, but not all.

Storyqueen: It's really tempting to slap some zombie makeup onto hubby, have him put his cowl on, and send him to scare the bleep out of them. I admit it!

AB: Yeah, I know not everyone has great libraries, which is a huge, massive SHAME. But there are still lots of options, as Saundra touched on.

Amber: That DOES make me feel better! :) And yeah, I think it's something that people don't quite know about. Or they don't think it's very common and therefore doesn't have much of an impact. But I'm only three weeks on the shelves, and it's already hit me in a major way!

Karen: That's a GREAT point. I don't understand why this hasn't been picked up or talked about more.

INSANITY! See - this is just another reason why I hate ebooks. Because it just makes them easier to steal. Now - let those freaking pirates try to walk into a bookstore and walk out with it unpaid for. BLAMMO I say is what they'd get. I mean I know I have to give in to technology and that ebooks are the wave of the future. But I still prefer the good old fashioned paperbacks. Perhaps if the publishing houses lowered the ebook prices to reflect the lowered overhead it costs them to "produce" said ebooks it would also help the situation. Regardless no excuse for pirating the written - e word.

FIGHT ON CARRIE!!
*still loves being surrounded by the sight and smell of real books*